The grandfather of all fighting games returns one last time with Ultra Street Fighter II. But does it hold up to today’s complex brawlers?

Street Fighter II was born in the 80s. Seems like an impossibly long way back, but the Capcom classic saw release in the arcades in 1987. It garnered near-instant acclaim from just about anyone who played it, as the game took a relatively new game genre and perfected it. Sure there are some who don’t particularly care for Street Fighter II, but it’s hard to deny the fact that it made the fighting game as ubiquitous as it is even today. 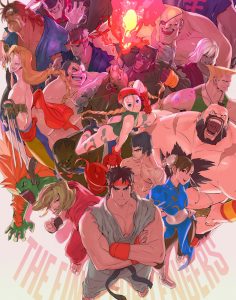 Personally, I ate it up with a side of slaw. The game devoured not just quarter after quarter, but the majority of my time in the local pizzeria and video rental place. Actually, anywhere there was a Street Fighter II cabinet was here I wanted to be.

And when it came home on the SNES and Sega Genesis? Heaven.

Ryu became my main, and I played the hell out every successive incarnation. Champion Edition, Turbo edition, Super Street Fighter… it didn’t matter to me how many times Capcom added a little to the core mechanics or chucked in some extra playable fighters – I’d ask my parents to buy it for me. And you know what? Each one was better than the last.

When Capcom moved past SFII though, was when the series kind of lost me. SFIII didn’t have it for me, and while I enjoyed SFIV well enough, SFV didn’t hold my attention in the least. SFII though? I can still go back to it and have a blast.

I thought it was important to give you some background right off the bat. You’ll need to know where I’m coming from with this review, because the end score is largely based on how much you love Street Fighter II, in all its forms.

So what makes USFII different than 1994’s Super Street Fighter II Turbo? Well, outside of looks and sound, not all that much actually. The core game is the same as what you more than likely know all too well. Not that that’s a terrible thing in the least.

Gameplay is pure Capcom 2D magic. There is one plane of movement, and no stage-breaks, moving to other locations, or smashing of furniture to be had. Combat is extremely straight forward and very combo friendly… if you know what you’re doing. 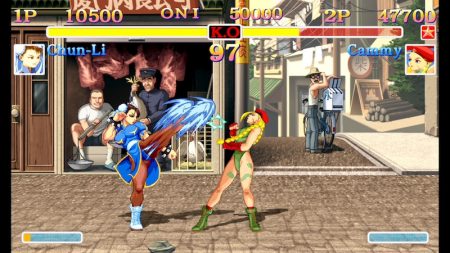 If you’re a button-masher, you can still very much enjoy USFII, but you’ll get so much more satisfaction out of performing fluid combos and linking stuff into special moves. Speaking of, Ultra combos are still in there, and cool – complete with ‘shadow’ effects. Of course, they’ve lost some of their luster next to the current crop of fighter’s special and finishing moves, but they’re still cool.

For the most part, the controls are great too. Street Fighter is a series that’s traditionally shined in the control arena, and this version of SFII is just as great as every other one. There are a few new moves sprinkled around as well, like Vega being able to climb on the cage in his stage. Just be aware that those are few and far between. So don’t expect too much to be different.

Needless to say, all of the above is good. Here’s the thing though, Ultra Street Fighter II plays like a 90s fighting game. Hell, you could probably say it plays like an 80s fighting game and get away with it. If that’s okay with you and you love SFII, then it probably is and you’ll dig this. If you prefer some of the advanced mechanics and bells ‘n’ whistles of todays fighters, well you might not be so keen.

A show-stopper… sort of

The looks of Ultra Street Fighter II are truly nice. I can’t complain a bit about the graphics here, as they’re flawlessly executed, and both characters and stages looks awesome. Though you might have seen almost all of this before.

USFII looks identical to Super Street Fighter II Turbo HD Remix. If you don’t remember that one, it’s a digital-only release that saw release a few years back. It’s also way cheaper, though it does lack a few things that Ultra offers. 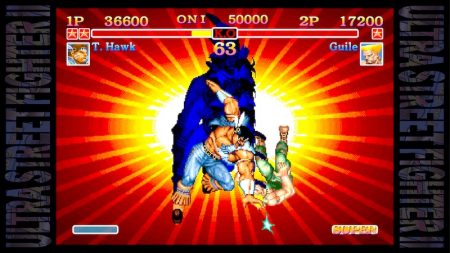 I don’t remember if you could swap graphic sets in that version of the game, but here you can flip-flop between the gorgeous designs of comic publisher Udon, and the original Street Fighter II look. It’s kind of fun to see the differences, but that’s about it and I can’t imagine anyone not wanting to just play with the new graphics.

Audio is as good as you’d expect too, with great music that’s become iconic in the fighting game arena. Voices are solid too, with crisp and clear Hadoken’s being thrown all over the place. I can’t say I like the announcer, but that’s not all that big of a deal. Though the original is light years better.

I should probably mention that there are two ‘new’ characters as well.

Both Evil Ryu and… Violent Ken… are included. Fun fact: Violent Ken has been in a Street Fighter game before! According to the SF Wiki, he’s a version of Ken influenced by M. Bison’s psycho power. So, there’s that. 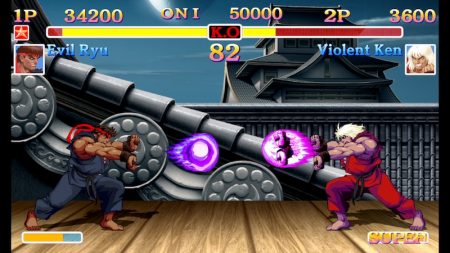 Here’s the hook for Ultra – the new modes. Not that they’re all new.

Included here you’ll find classic versus and arcade modes, as well as two-on-one matches where you and a pal can beat up another fighter. Ultra also has solid online play, with a sprinkling of features that beefs up the mode.

So what’s totally new then? The Way of the Hado, that’s what. Now, don’t get excited. No really, don’t. This is gonna sound kind of neat, but it’s not.

In Way of the Hado you play as Ryu and are tasked with beating the hell out of a bunch of Bison’s Shadaloo troopers. Oh, and it’s in 3D. And you have to use motion controls, a’la the Wii (kind of). Do you think that works? Do you think it’s fun? Well you’re wrong. It’s not.

After about five minutes of it, I defy you not to just go back to meat and potatoes Ultra Street Fighter II.

Still though, as iffy as it might be, at least Capcom tried to include something truly different. It’s clearly an add-on, and not meant to be a main event by any stretch of the imagination. But it’s still kind of nice. If it worked well and was fun, that would have been even better. Kind of unfortunate. Why not have stuck a copy of Super Puzzle Fighter in the with the deal? Or maybe even a selector where you could switch between different versions of Street Fighter II? True that would have made this more of a ‘collection’, but it also would have made it more worth the price.

Instead we get the above, plus a sort-of-cool color edit mode, and a gallery of Udon art. And that’s kind of not… great.

Excellent 2D graphics and sound, though we've basically seen it all before - 75%

2D fighting controls perfected, in the base game - 94%

Despite all that I said about the modes, Ultra Street Fighter II is still a great fighting game. There is the caveat though, that you'd have to be either a huge fighting game fan in general, or a big Street Fighter fan in particular, to really bother with this one. There just isn't enough here to justify the purchase of a game that you have probably played already. If you absolutely, positively have to have a copy of SFII on your Switch, then I'd still wait for it to hit some kind of discount. If not, then I'd have to say this one's a self-KO.

Jason's been knee deep in videogames since he was but a lad. Cutting his teeth on the pixely glory that was the Atari 2600, he's been hack'n'slashing and shoot'em'uping ever since. Mainly an FPS and action guy, Jason enjoys the occasional well crafted title from every genre.
@jason_tas
Previous Harbinger Renegade #5 (Comics) Preview
Next Tropico 6 Announced for PS4, Xbox One, and PC