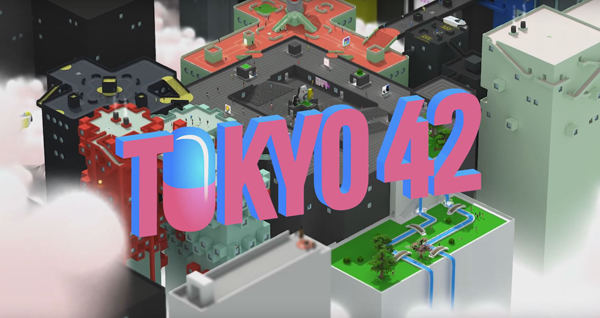 Indie developers Mode7, creators of the excellent Frozen Synapse and Frozen Cortex, have turned their hands to publishing as well.  The first game they’re publishing is Tokyo 42, the first game from Sean Wright and Maciek Strychalsk, collectively known as SMAC.  Described as the love child of Syndicate and the original Grand Theft Auto, the game takes place in a futuristic version of Tokyo.  You have been framed for murder, and so you end up becoming an assassin as you attempt to clear your name, but you soon discover there’s a lot going on underneath the surface of the city.

Tokyo 42 is an isometric open world shooter taking place on the vibrant and colourful rooftops of “Micro Tokyo”, with people going about their days while gangs patrol their strongholds looking to take down any would be troublemakers.  Becoming an assassin, you pick up various contracts to take out a variety of targets or groups.  Sometimes it can be something like luring one gang into another gang’s territory and watching them take each other out in a hail of bullets.  Sometimes you have to snipe someone from a distance, or maybe you’ll have to fight your way way through a stronghold to get to the boss and take him down.

You have a variety of tools at your disposal in which to do your job, and completing various side missions will unlock even more things for you to make use of, some of which will make your life much easier.  Vendors all over the city sell a variety of weapons, and it’s up to you to choose what’s best to do the job, be it going in stealthy with a katana or using a sniper rifle, or just taking in a minigun and going crazy.  In spite of this choice, however, some methods tend to be much easier than others.  Usually, sneaking around and meleeing people is the best way to go.  You can even disguise yourself in order to sneak past enemies unnoticed, although there is an energy bar which depletes as you use the disguise, and you have to find a charge pad to refill the bar.  The default sniper rifle, in contrast to other games, is quite loud and your target often hears it coming, giving them enough chance to step out of the way and then quickly snipe you down. 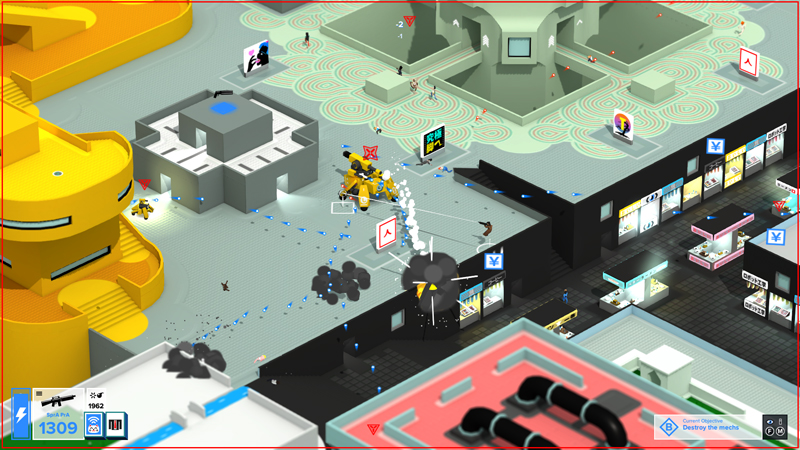 Using guns in the game can often be kind of annoying.  The isometric viewpoint combined with the fact that there are multiple height levels in the game cause problems.  As you move your aiming reticule around, the game guesses where it thinks you want to aim, which is fine, but you’ll find instances where you’ve aimed at a target you feel like you should’ve hit, but ultimately end up just missing.  Once you are discovered in an area populated with bad guys, the AI goes crazy and throws everything at you, as you try to dodge a storm of bullets and grenades.  It feels awesome if you successfully manage to dodge the bullet hell and come out of the other side, but it can feel unfair when you hit the dirt and have to start again.

For all the trigger happy tendencies the AI shows, it can also show a remarkable amount of stupidity when you’re sneaking around.  If you’ve not already put an area in alert mode, enemies won’t react immediately if they spot you, instead taking a few seconds via a visual indicator on screen before opening fire.  This gives you a chance to escape, but also if you dodge out of the way, the enemy will just continue going around their patrol path unaffected.  On the plus side, you can exploit it and use it to avoid detection and carry on your way.

The isometric viewpoint of Tokyo 42 can be rotated in order to give you different views, and this is both an asset and a detriment.  Spinning the landscape around enables you to find shortcuts or escape routes, and even see secret items that you can collect.  Finding secrets is one of the best parts of the game, as you can unlock new suits and cat skins, and also find additional weapons to use, such as a silent sniper rifle which makes it a much more viable weapon option.  Unfortunately, the camera also tends to get in the way when you’re trying to get around, and you can often get killed by stray bullets as you try to get a better view of what’s going on.  There were a couple of missions in the game that required you to use a bike to either get around or race, and having to rotate the camera in these missions in particular was a pain. 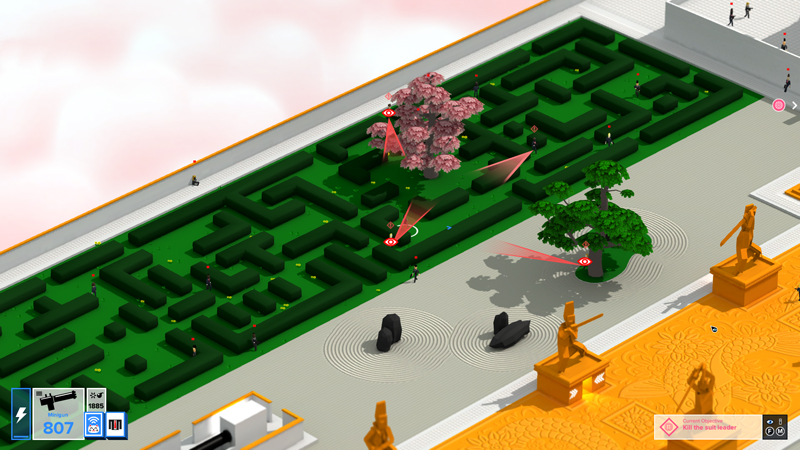 An interesting feature of Tokyo 42 is the ‘Nemesis’, which sees an assassin deployed to try and kill you.  If you manage to discover them and take them down before they get you, you get some money to spend.  This can happen at literally any time in the game which includes, annoyingly, when you’re in the middle of a mission.  You can be stealthy making your way though a gang stronghold only for an assassin to start shooting at you, putting the stronghold into alert mode and causing you unnecessary problems.  There are frequent save points, which means they shouldn’t cause too much damage, but it’s still annoying and it would’ve been better if it didn’t happen while you were in the middle of a mission.

The single player mode contains 25 missions which will probably take you around 10-12 hours to complete in total.  There’s also a wealth of side missions and secrets to unlock, including badges for taking out all the enemies, completing the mission without being discovered, or both taking everyone out and not being seen.  There’s also a multiplayer mode, which contains a deathmatch mode, but I didn’t get a chance to have a good go at it.

FINAL THOUGHTS
Tokyo 42 is a visually and musically impressive game with an interesting cast of characters and some genuinely fun moments and missions.  The game is at it’s best when played as a stealth game, and while guns and grenades are a viable option, they’re much more frustrating.  The isometric viewpoint and camera rotation are both a help and a hindrance, and that combined with the inconsistent AI and troublesome targeting stop this from being a great game.  But it’s still a good game and worth checking out, especially of the idea of deploying cats and slicing people up with katanas is your idea of fun.

Tokyo 42 is available now for PC and Xbox One and is coming to PS4 in mid-July.

Micro Tokyo is an incredible place to be - 90%

Stealthy gameplay is a tonne of fun - 85%

All out gunfights sometimes unfair and frustrating - 60%

An enjoyable isometric action game with a fantastic setting and interesting premise. However, problems with the camera and aiming, as well as inconsistent AI, stop this from being great.

Mike is Brutal Gamer's Indie Editor. He has been playing video games since the early 90s and is fond of racing games, puzzlers and MMOs. Typing /played while in WoW makes him cry, but not enough to stop him playing some more.
@Ognawk
Previous SDCC 2017: NECA unleashes the mother of all TMNT exclusives
Next Brutally Honest Podcast 29: The Dark Universe and Far Cry 5

Things are about to get Odd once again for PC gamers, as Oddworld: Soulstorm Enhanced …