This Fall, Marvel and Capcom go back at it for another round of video game versus madness. But you’ll get a taste of what’s to come long before that.

“Fight fans, if you can’t wait until September 19th to see heroes from two awesome universes collide in Marvel vs. Capcom: Infinite, we’re bringing you a sneak peek one month earlier when the battle explodes onto the covers of your favorite comics,” said Marvel Games executive creative director Bill Rosemann. “The game makers at Capcom and Marvel are working closely with a team of the industry’s top talent to deliver all the over the top intensity you’ve come to expect from this fan favorite franchise.”

MvC is a classic fighting game series at this point. With plenty of games under its belt, the Capcom-made brawler seems to be resurgent too, with a recent re-release of its last installment and now a brand new one. But again, while the interactive version won’t hit till September, the comic covers will come just in time for the Summer heat.

And they’ll be plentiful too, with a total of 20 books figuring into the initiative. The covers themselves haven’t been revealed as of yet, but we do have the slate of books for you. So you’ll know what to target if you want ’em all. 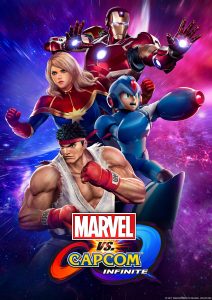 Jason's been knee deep in videogames since he was but a lad. Cutting his teeth on the pixely glory that was the Atari 2600, he's been hack'n'slashing and shoot'em'uping ever since. Mainly an FPS and action guy, Jason enjoys the occasional well crafted title from every genre.
@jason_tas
Previous DESYNC (PC) Review
Next The Flash Infantino Street S3 E22 (TV) Review