The battlegrounds of World War 1 are about to expand with EA’s upcoming packs for Battlefield 1.

One of the best received FPS’ of 2016, Battlefield 1 has been a pretty big hit for EA and DICE. Not that there’s a lack of stuff to do in the game’s single and multiplayer modes, but it’s always great to see more. And that’s just what the quartet of new expansions will offer.

And we’re not talking just rehashed locales either here. These packs offer four new experiences, and all of them sound pretty different and unique. 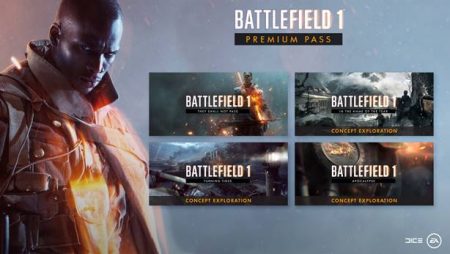 In all, the above loads you up with multiple new multiplayer maps, weapons, and even new classes. A total of 16 new maps will make tiers debut as a part of the four packs, along with an impressive 20 new pieces of hardware. That makes for a pretty meaty expansion of a game that already offers online warriors quite a bit.

Also worth mentioning is that Battlefield 1 Premium Pass members get a two-week jump on all of the above. Though that’s not all, subscribers also get “14 Superior Battlepacks, priority sever access and more”.

Battlefield 1 and its Season Pass are available now on the Xbox One, PS4, and the PC. The expansions have yet to be dated, but those looking to get a taste of what the game has to offer, can do so for free very soon on the Xbox One and PC.

Both the single and multiplayer modes will be free to play on those platforms from March 3rd through the 5th. You’ll get a good amount of time to play too, with a total of ten hours included in the timed trial. As to what’s included, it’s the first two War Stories from the campaign (so, not the whole thing) and the fully loaded multiplayer experience. Even better is that all of your achievements and experience carry over, if you do decide to get the full game after the trial closes.

Jason's been knee deep in videogames since he was but a lad. Cutting his teeth on the pixely glory that was the Atari 2600, he's been hack'n'slashing and shoot'em'uping ever since. Mainly an FPS and action guy, Jason enjoys the occasional well crafted title from every genre.
@jason_tas
Previous Brutally Honest Podcast 17: Heroes, Tattoos, and Toy Fair 2017
Next Nintendo Showcases “Nindies” in Midweek Direct