Home / Action Figures and Toys / Mezco adds Deadpool to the One:12 Collection

Mezco adds Deadpool to the One:12 Collection

That Merc with the Mouth himself, Deadpool is now a part of Mezco Toyz’ One:12 Collection.

The hottest comic character seemingly for the last few years, the popularity of Marvel’s merry mutate merc just doesn’t seem to be slowing down. And now he’s getting a figure in Mezco’s One:12 Collection.

I don’t remember seeing this one on display at Toy Fair or either of the big Comic Con’s last year, so it’s news to me. What isn’t news though, is the quality of Mezco’s line that bears the One:12 banner. Frankly, it’s awesome, with tons of articulation and cloth outfits that actually look right. Not many toy lines have gotten that right over the years.

And Deadpool here looks right in line with all that, styled after his classic Marvel Comics look. He comes with a pair of head sculpts too, so you can display him with his more emotive face, or his classic (more Liefeld-esque) visage.

Oh, and as you can see, you get yourself a Headpool too. That’s nifty. Deadpool is set to ship some time in late Summer, from August through October. He’s available for pre-order right now, right here.

Scroll down for the full details on him

The Deadpool One:12 Collective figure features:

•  One:12 Collective body with  over 30 points of articulation

•  Sculpted gloves on each hand

•  Vambrace on each forearm 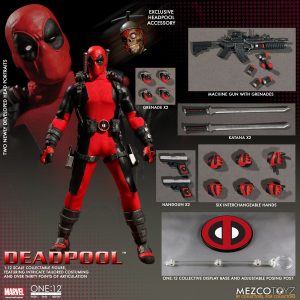 Each One:12 Collective Deadpool figure is packaged in a deluxe, collector friendly box, designed with collectors in mind there are no twist ties for easy in and out of package display.

Jason's been knee deep in videogames since he was but a lad. Cutting his teeth on the pixely glory that was the Atari 2600, he's been hack'n'slashing and shoot'em'uping ever since. Mainly an FPS and action guy, Jason enjoys the occasional well crafted title from every genre.
@jason_tas
Previous Brutal Gamer Awards 2016: Special Categories
Next The Flash Dead Or Alive S311 (TV) Review