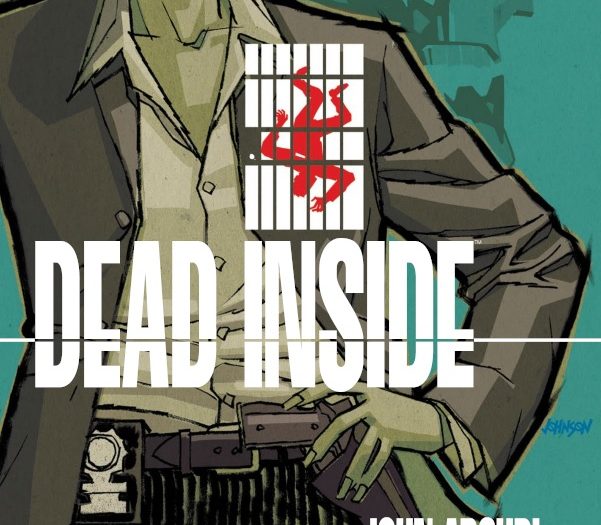 Dead Inside opens up with a close-up of blood spatter, and a quote  of “I hate you”. And where it leads, you have no idea. 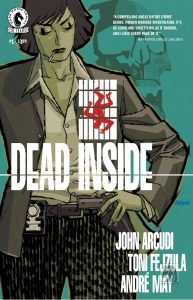 Dead Inside follows detective Caruso in the Jail Crimes Division in an unnamed city. Caruso’s late to work when she gets the call that there’s two dead bodies in the local prison. That in itself is nothing terribly out of the ordinary. People die in prison sometimes. When it’s a double murder and the facts do not add up, that is when you start to dig into things a bit more.

Two bodies: one large man in a single cell, the other is a pint-size fella, in the kitchen. One is a murder, the other appears to be a suicide. And they say the tiny guy killed the large man? Half the surveillance doesn’t work. You can’t trust the inmates to be helpful. What is going on here?

The warden declares things an open-and-shut case, even going so far as to deny our detective normal investigative procedures. The detective’s Lieutenant agrees, with both bodies’ cause of death seeming obvious, there is no need to waste taxpayers money. But there is obviously more here. One of these men was up for parole. The detainee up for parole, his family was never notified of the possibility.

Caruso just can’t catch a break today. If the detective work isn’t hairy enough, she gets a visit from her ex-husband. He’s getting re-married. Add that onto the pile of crap on her shoulders today. So begins the free-flowing alcoholic beverages. Take away the confusion, the stress. Vent to your neighbor, who knows nothing of the crime scene. But then you learn something that could help? Got to find a way to get to the morgue!

Caruso is drunk, and she’s willing to cash in on old favors if it will get her an X-ray. Finally she leans hard enough that the coroner agrees to the X-ray. Caruso swears she saw the victim swallow something before everything went down. Xanax, Speed, Ecstasy, something. She never expected to see what the coroner found!

Caruso is beginning to put things together. She is seeing further down the rabbit hole than either the warden or her lieutenant want her to. Things definately are not adding up. If things went as the warden describes, then why are they finding these other details that have no place being here. How far up does this cover up go? Who wanted these two men dead? What will it take to learn the truth?

Just when you thought you have an idea of what's going on with Dead Inside, they throw you for another loop. Follow along with Arcudi as we dive deeper in Dead Inside.

A fan of media on multiple platforms, I am always watching or playing something! Who knows what I will be on to next?
@mackeyp42
Previous Inhumans and X-Men jumbo special issues to kick off RessurXion
Next Space Hulk: Deathwing (PC) Review