Ben-Hur comes to home video in the form of blu-ray in a package filled with interesting behind the scenes features, not to mention the movie itself.

Together, the movie and features combine to make a fun combination that fans of the novel or original adaption may enjoy. Unless you’re a major fan of behind the scenes or Ben-Hur specifically, though, it is not out of the question that some of the extras, and even the movie might not be what you’re looking for.

The myth, the novel, the remake:

The most important aspect of a blu-ray is the movie itself. In the case of Ben-Hur, we are treated to a nearly two and a half hour foray 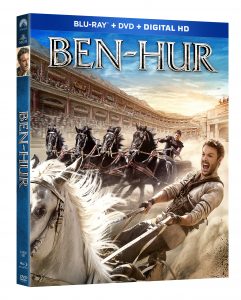 into ancient history in Jerusalem. We get a quick explanation of who specific characters are and their relationships. Messala (Toby Kebbell), the adopted brother of Judah Ben-Hur (Jack Huston) leaves to join the Roman army.

Three years later, he returns to his home and asks Judah to ensure that Pontius Pilate will be able to traverse Jerusalem with no problems. A zealot attempts to assassinate Pilate, and Messala responds by separating Judah from his family and forcing him into slavery, accusing him of being responsible for the attack.

After a few years of bouncing around the seas as a slave, Judah makes his way home, where he meets Iiderim (Morgan Freeman), a Nubian Sheik. Ilderim trains Judah as a charioteer to race against and take revenge on Messala.

At the end of the day, Judah forgives Messala.

As for the narrative and the story told, I was pretty happy with it. I don’t know what else I could have expected in terms of storytelling. The promises of an epic adventure are definitely fulfilled, with the added bonus of a completely epic chariot race towards the end of the film. Jesus of Nazareth is included as a character who the audience presumes to have taught Judah about forgiveness.

In 2016, the storytelling in a film format isn’t groundbreaking, but that is okay. It was a fun and epic romp through a classic story.

I also really feel that I need to mention the effects used throughout the film. At various points, but especially during the iconic chariot race. With a discerning eye, I might be able to see when the horses weren’t real, but on first viewing, I was unable to tell. The computer generated horses were the high point special effects for the film.

The Blu-ray of Ben-Hur includes over an hour of special features. The DVD, also included in the blu-ray combo pack, doesn’t have any of those features, however.

The features include behind the scenes information and interviews with the cast of Ben-Hur. Some of the extras include an explanation of the legacy of Ben-Hur, and why it remains a popular story today, an explanation of how the chariot races were made, how the casting was done, deleted and extended scenes, and music videos from the movie and behind the scenes on those videos.

There isn’t a ton to say about the special features except that they answered all of my questions. when I got to the end of the features, I found myself wanting to watch how certain, different scenes were made. If there is one complaint about the special features, it would be that they whetted my appetite for more, and then didn’t supply more extras.

Whether or not you’re going to find something you enjoy in the Ben-Hur blu-ray depends greatly on what you’re looking for. The movie is a fun adventure, and the extra features offer great insights for film, literature or history buffs. I found myself looking for more extra features, even if it would have really been just more of the same.

The Ben-Hur blue-ray is a worthwhile purchase for fans of the original film or book. If you aren’t sure where you stand on the original, this might be a good time to jump in to see why the story of Ben-Hur is so highly praised.

Ben-Hur, as a film, doesn't pull any punches in it's storytelling. I wasn't surprised by anything I saw, but I thoroughly enjoyed what I saw. The extra features gave the documentary nerd in me something to look forward to after the action ended.

Erich was introduced to gaming by his grandfather before he could walk. Since then, he has grown up loving Nintendo and most games in general. He couples his love of videogames with journalism to cover news, provide reviews and tell it how it is in the gaming world.
Previous Crytek Reportidly Not Paying Employees
Next It’s time for an old fashion with Old Time Hockey