Sometimes you just have to swing for the extras. See what goodies come in the latest, an possibly largest, the Dishonored 2 Premium Edition. 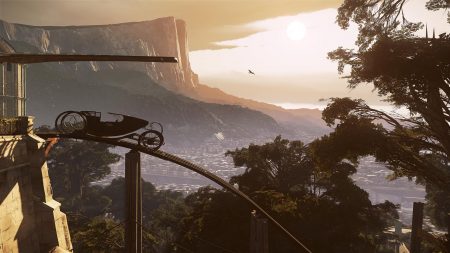 Everyone, at one point or another, has wanted to drop the extra cash for the premium edition of a new release. Maybe it comes with a beefed-up version of the in-game gun. Sometimes you get an extra mission or two. What if I told you, that when I went to pick up my copy of the Dishonored 2 Premium Edition, the sales associate’s eyes lit up. The guy told me he hadn’t actually seen any yet that day. He motioned to the manager, who had to get it from the back.

Now not having worked at a retail game store before, I figured this was routine, store the more expensive items in the back. And while that may have been part of the equation, that was not the whole story. This girl spent 10 minutes in the back of the store. My thought was, that it can’t be that hard to grab a small box, and be on the way. I had no idea. The manager comes around the corner, both hands full and a big smile on her face. 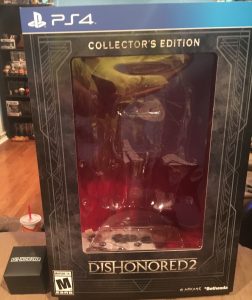 A large container is set before me, and I am on my way. This thing is HUGE. Either side have copies of Duke Luca Abele’s Wanted posters for Corvo and Emily.

Now, the in game coins are always a welcome treat. The extra charms may or may not be useful, depending on your style of play. Though, you may be in luck, since Dishonored 2 allows you to craft Runes and Bonecharms. The box itself is rather cumbersome, so I may break it down for the WANTED posters. Though the ring and mask will proudly be on display. Any Dishonored fan would enjoy having this in their collection.

A fan of media on multiple platforms, I am always watching or playing something! Who knows what I will be on to next?
@mackeyp42
Previous Serenity #2 (comic) Review
Next HellBoy 1954 – The Unreasoning Beast (comic) Review