A pivotal episode for Ash vs Evil Dead, ‘Ashy Slashy’ is a shocker.

Crafted in the same mold as classic slasher flicks, the just-aired eighth episode of Ash vs Evil Dead was a stunner. I know what you’re thinking, that’s hyperbole. Every episode of this show is loaded up with blood ‘n’ guts, death, and horrific demons. How “shocking” could this one have been? The answer my friends, is really, really frigging shocking.

Things pick up right from last week’s episode, and go from there. So Ash is a prisoner of Baal, greater demon of hell. He’s apparently been ‘broken’ by the creep too, and is mow in his thrall. Locked away in an old, run down insane asylum, Ash has one thing on his mind – kill the Necronomicon.

As you might remember, the book and Pablo (Ash’s buddy and fellow demon-hunter) are now one in the same. And that doesn’t bode all that well for the young sidekick.

So that’s the recap on where we’ve been. The following is a recap and review of where the show goes in this episode.

The aforementioned Pablo, Kelly, and Ruby all head over to the asylum to free Ash, who’s doing his best impression of a raving loon of a killer. Read into that what you will. When they into the building though, things go immediately wrong (shock!), and they get split up as they try and find their possibly-possessed, chainsaw-handed pal. And yes, they used the pet-tracker to find him.

Tom the sherif is there, and so is his wife Linda and his daughter Lacey. Why? ‘Cause the dope is still sorta cowing down to Baal and he brought them there so he could ‘protect’ them. Here’s the thing though, that was a terrible idea. Baal has apparently killed Lacey (we don’t see that moment though) and she’s back as a Deadite.

Kelly squares off against her, but Tom gets in the way when Lacey appears as a human. That’s short lived, and so is Tom. The sherif is quickly beheaded by what was his daughter in a gruesome (even for this show) and shocking scene. That’s followed by Kelly putting a load of bullets into Deadite-Lacey’s head.

Boom. And no, neither one of those are the big shocker. It takes a while and I’m getting to it. Relax.

As for Ruby and Pablo, they find themselves at the wrong end of Ash’s chainsaw. He creepily chases them through the asylum, eventually catching up to them. They take shelter in a closet for a few tense minutes as they hatch an escape, and Ruby shows a little humanity. the show is still building on the fact that she’s no longer an immortal.

Meanwhile, Kelly runs afoul of the Ashy Slashy puppet. Yep, it’s a Deadite/demon and it’s freaking nasty. The fight scene recalls some of the best moments of Evil Dead 2/Army of Darkness’ semi-slapstick fights. It’s great, and includes more than one awesome moment. Though the best might be Kelly’s ‘Ash’ moment at the end, where she one-lines it up as she splatters Ashy Slashy’s head with a single bullet.

The episode kicks it into high gear though, when we cut back to Pablo and Ruby. 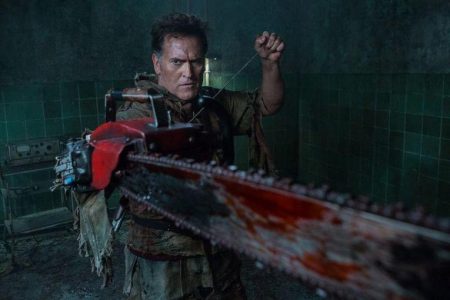 Ash finds them and drags Pablo off, containing Ruby momentarily.  So where’s he take him? Well, he chains the young ghost-beater up and hangs him from the ceiling in the operating room. It’s there that we find the conclusion of this installment too.

Facing off against the entire team (plus Linda), and joined by Baal himself, Ash is just about to chop Pablo in two when he… tells Baal that he was never under his control. He was faking it the entire time – classic Ash. And more over, he’s got everyone in the room with him, meaning that he’s managed to get Baal and the ‘book’ together. And you know what that means.

Held down on an operating table, Baal is beset by the entire team as Pablo speaks the incantation to send the demon lord packing. As he finishes, a shockwave rips through the room, sending everyone but him and Baal flying. It’s all over though, as a flailing Baal literally explodes in a shower of black goo.

All is well and the group celebrates Pablo’s biggest moment yet on the show.

Oh, I forgot the big shock, didn’t I? Well, see… Pablo stops celebrating and gets a funny look on his face. Something’s wrong. And that ‘something’ would be his torso sliding off his legs and hitting the ground with a gore-soaked thud. His loosed intestine even twitches a little. Shocked?

You probably shouldn’t be, as this show has shown time and again that anything can happen. And short of Ash himself getting offed, which may happen in a final episode (who knows?), anyone can get killed. It happened with Ash’s dad, and now it’s happened to Pablo. I guess.

What’s odd, is that this being Ash vs Evil Dead, you don’t really know for sure if he’s gone even though he’s been cut in half. I will say that next week’s episode seems to wrap everything up, and we see the team hauling what looks like bodybags. Still though, remember that Pablo is the Necronomicon now, since he threw the actual tome into hell and he’s been possessed by it.

Will it bring him back? No idea. It’d be a cool trick, and a neat way to both stun audiences and leave the season with a happy ending. As I said though, this is Ash vs Evil Dead, so the likelihood of that happening isn’t too great. Funny? Yes. Happy? No.

In a season that's been a little hit and miss, this was a very solid episode. I love the show, don't get me wrong, but season two seemed to have less Ash moments than the first. This episode has plenty of Ash, though not in the usual way we all prefer. Still though, it's a great installment with a pair of big moments. It's worth the watch just for those.

Jason's been knee deep in videogames since he was but a lad. Cutting his teeth on the pixely glory that was the Atari 2600, he's been hack'n'slashing and shoot'em'uping ever since. Mainly an FPS and action guy, Jason enjoys the occasional well crafted title from every genre.
@jason_tas
Previous Dishonored 2 (PS4) Review
Next Brutally Honest Podcast 8: Mass Effect, Mario Run, and More