Wally West is depressed he hasn’t gotten his Kid Flash powers. Now he is having dreams. But what can he do about it, in The Flash Shade. 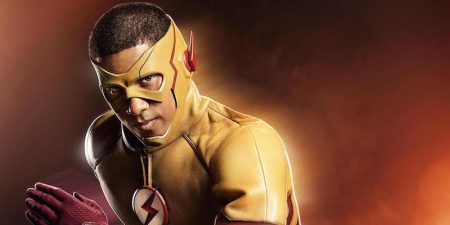 Flashpoint Wally West was Kid Flash, been depressed he hasn’t gotten those powers back. Now he is having dreams about it. The same dreams as some of the previous Alchemy victims. Wally is excited, while Joe and the others are scared. Meta-humans with Alchemy’s help seem tortured, so which side will Wally be on? The metas from the Dark Matter explosion, or from Alchemy’s meddling.

HR petitions the team to reopen STAR Labs as a museum, thinking people will become suspicious of all the activity at an ’empty’ lab. Across town, Barry and Joe tell Wally about being Kid Flash in Flashpoint, where Wally meets a grim fate. Wally doesn’t want to hear it, and decides to take off for a break.

We witness a random figure being choked out by a giant shadow, who we learn later is referred to as Shade. Barry tries to build a rapport with CSI Julian, which is off to a rocky start. HR reveals facial phasing from his Earth, which completely catches Cisco and Caitlin off-guard. Joe levels with Wally about being concerned where his powers stem from, right before Wally begins to hear the
voice of Alchemy in his head. Caitlin reveals her growing Killer Frost powers to the group, albeit after being prodded by Cisco to do so. There are a lot of emotions floating about in this episode, which leaves the action side of things a bit sparse. Not to say that you go without, however.

Shade appears at a movie theater, seeking to take on the Flash. Cisco quickly determines a way to shut Shade down, and put things right. Meanwhile Wally needs to break free of his confines, and is willing to injure his sister to make that happen. After a bit of some chemical assistance to cool him down, Wally, Joe and Team Flash figure out a way to corner Alchemy. Things go as planned, until Alchemy says ‘You have no idea what is about to begin.” He falls to the floor, when a mysterious blue speedster begins bouncing around the room. The mysterious figure knocks out Joe’s police team, before setting his sights on Barry. Wally’s fate is unknown after grabbing one of Alchemy’s artifacts for himself. Barry finds himself pinned to the ceiling by the new speedster, who reveals himself as “Savitar, the god of Speed”.

It appears that season 3 will up the ante for Team Flash, as there are two major antagonists at play in Central City: Alchemy is still at large, and not much is known yet about Savitar. One thing is certain, he is quick enough to put Barry in peril. HR was helpful in determining how to stop Shade, though it really felt like a shallow reach as far as villains go. Cisco and Caitlin are at odds after learning of her chilly capabilities, and now Cailtlin fears she will have to abandon the team, which is like her family. Everyone is worried what will come of Wally after the confrontation with Alchemy. CSI Julian was unable to be reached during this conflict. Does that mean that he has a role in the disaster with Savitar and Alchemy?

Do yourself a favor, and check out CW’s The Flash, airing 8pm EST/7pm CST.

A fan of media on multiple platforms, I am always watching or playing something! Who knows what I will be on to next?
@mackeyp42
Previous Valve May Need to Pay up to 3 Million in Fines
Next Kojima to Receive Previously Denied Award