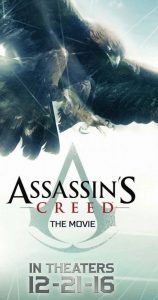 We all know by now, that Ubisoft Games is not putting out a game this year. This is met with mixed feelings from fans worldwide. That being said, we are getting a motion picture, and the latest Assassins Creed trailer looks appealing.

Featuring Michael Fassbender, Marion Cotillard and Jeremy Irons. Fassbender plays Callum Lynch, a man with a family bloodline that goes back at least as far as the Spanish Inquisition. Fans of the Assassin’s Creed franchise should still be happy with getting a taste this year.

A fan of media on multiple platforms, I am always watching or playing something! Who knows what I will be on to next?
@mackeyp42
Previous Resident Evil 7 Hints…
Next An Astro-Affair: Interview With Dan Fisher of Astro-Miners