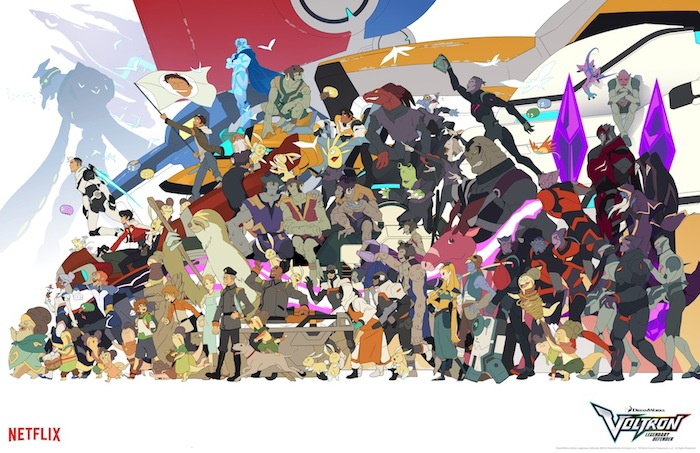 Netflix’ popular revival of Voltron continues in the first month of 2017.

If you’ve seen Voltron on Netflix, then you already know what all the hubbub is about. Neatly put though, Voltron is a nearly perfect re-envisioning of the classic cartoon from the ’80s. The animation is spot-on, in a cool retro way, and looks great.

Not that Voltron stops there, since plenty of what made the the classic property so great has made it into the new show. And even the new ideas that’ve been added pretty much all fall right in line with what you’d expect.

I think what I’m saying is that it’s good. And since season one ended on a cliffhanger, fans have been waiting with baited breath to see what’s next. Well, that moment is just a scant few months away.

Season two is set to hit the streaming service all at once this coming January the 20th. It’s already made an impression though. An entire episode from season two was screened at NYCC last week, in front of a gaggle of fans.

After that, actors Jeremy Shada (Lance) and Bex Taylor-Klaus  (Pidge) took the stage. They were joined by executive producer Joaquim Dos Santos, co-executive producer Lauren Montgomery and story editor Tim Hedrick. All of the above teased a little bit more of what fans could expect from the show down the line.

Of what was discussed, there were some highlights. Such as:

Not much to go on is it? Ah well, at least its’s something to tide you over till the years turns.

Jason's been knee deep in videogames since he was but a lad. Cutting his teeth on the pixely glory that was the Atari 2600, he's been hack'n'slashing and shoot'em'uping ever since. Mainly an FPS and action guy, Jason enjoys the occasional well crafted title from every genre.
@jason_tas
Previous October 19th Valiant Previews: Faith and Ninjak
Next Steam to officially connect with Dual Shock 4, other pads soon