NYCC 2016: Grab these IDW exclusives at the Con

From Jem to Revolution, IDW will have some big name exclusive variants at this week’s NYCC.

Catch up with IDW at the Con

IDW has a ton and a half of big titles, especially now in the face of their monster Revolution, which reshuffles their properties into a shared universe. And a good number of those books will have exclusive variant editions at NYCC.

This week’s con will see books like ROM, Revolution, and Star Trek get special covers that you’ll find only at the show. All of the below will be available at the IDW booth, and you’ll even be able to meet talent and get your copies signed (check with IDW for times). 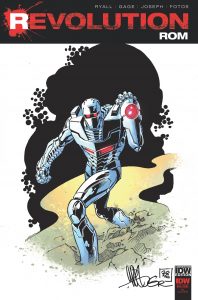 Here’s what’s set to be available

Jason's been knee deep in videogames since he was but a lad. Cutting his teeth on the pixely glory that was the Atari 2600, he's been hack'n'slashing and shoot'em'uping ever since. Mainly an FPS and action guy, Jason enjoys the occasional well crafted title from every genre.
@jason_tas
Previous NYCC 2016: Valiant ‘live action’ project news
Next NYCC 2016: Valiant loads up for the Con