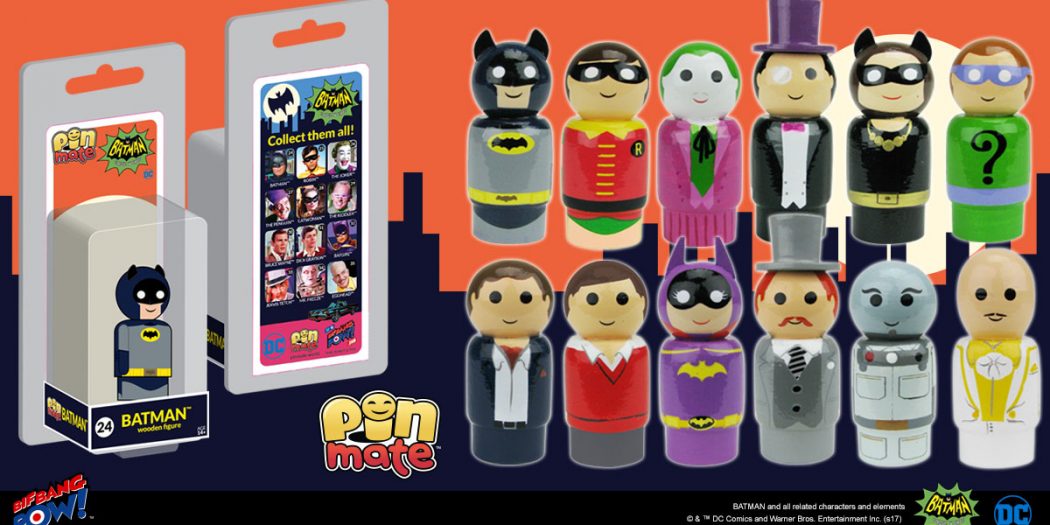 Break out the sound effects, Batman ’66 Pin Mates are coming

Biff, Bang, Pow! is about to release a series of their neat little Pin Mates figures based on the classic Batman TV series.

Doing the Batusi would be tough for Pin Mates

These might look like those little figures that you used to play with as a tyke. Pin Mates though, are a hot commodity. The line has launched all kinds of licensed figures, and now toy-maker Biff, Bang, Pow! has moved onto that campy classic, Batman ’66.

It’s a smart move, with the old series being arguably more popular today than it was back in the 60s. Batman ’66 (as it’s now known) has a monthly comic from DC, toys from Mattel, and even an animated movie that’ll bring the remaining original cast back together. So yeah, it’s hot right now.

The Batman ’66 Pin Mates first made their appearance at this past SDCC at the Entertainment Earth booth, and made an impression. the mini-figures are made from real wood, stand in at 2″ tall, and are hand painted. That’s not something that you see everyday anymore. The art is 360 degrees around the figure too, which is pretty cool, and gives a good appearance no matter how you have ’em displayed.

All are individually numbered within the series as well. Batman starts things off with number 24 and they run through to super-niche character Egghead (who was played by Vincent Price on the show!) at number 35.

Each one will run you $4.99 USD, and they are available right now to pre-order on Entertainment Earth. They’re expected to start  hitting this November.

Jason's been knee deep in videogames since he was but a lad. Cutting his teeth on the pixely glory that was the Atari 2600, he's been hack'n'slashing and shoot'em'uping ever since. Mainly an FPS and action guy, Jason enjoys the occasional well crafted title from every genre.
@jason_tas
Previous Valve Pulls All Digital Homicide Games From Steam
Next Halcyon 6: Starbase Commander (PC) Review