Home / Android / Nearly 80% of Pokemon Go Players Have Moved On.

Nearly 80% of Pokemon Go Players Have Moved On.

Pokemon Go has steadily been loosing players ever since it was released. This is to be expected of any multiplayer game, but the sheer initial popularity of Pokemon Go was hit with a massive loss of players. Initially it was the most popular game of all time. It had around 120 million people playing it, more than every other mobile game put together. That number has dropped however, and now it has lost 79% of its original player base. 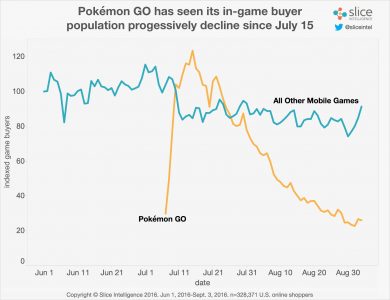 But the interesting thing about that is that Pokemon Go is still utterly dominating the mobile market. In August, when it was well into its decline, it generated 28.4% of all mobile game based income. For comparison, Candy Crush, the game just beneath it, generated 4.5%. So despite the drop in players, Pokemon Go has still remained an incredibly popular and profitable game. Despite not being the titan it was at launch.

Granted it is still possible that the games popularity will continue to dip. As seen in the provided graph, the reduction in players has been steady even since the game’s release. It is still profitable now, but only time can tell how long it will stay that way.

A recent college graduate and life long gamer, David is now working as a freelance journalist.
Previous Wave 3 of Ghostbusters and Giant/Ant Man arrive from DST
Next Get me… Solo #1 (Comics) Preview