Wave 3 of Ghostbusters and Giant/Ant Man arrive from DST

Diamond Select’s classic Ghostbusters line is expanded yet again, and Ant Man makes a big/small splash in stores this week.

Wave 3 of DST’s Ghostbusters Select action figures. Who else did you think I was talking about? Ant-Man maybe? Well, if you’ve got a super-villain skulking about, maybe he’d be a good choice. For spooks, specters, and ghosts though, the boys in gray are your best bet.

This week, DST’s excellent line dedicated to the original Ghostbusters movies expanded with a new version of Ray Stantz, Quittin’ Time Ray. He’s not alone though, because a pair of long-awaited figures joined him on the shelves in Janine and Slimer.

Yep, not content to make him/it as a pack-in or sidekick character, DST has gone all-out and produced a full-on Slimer figure. And quite frankly, he’s pretty damn awesome. Loaded up with a pair of alt faces, so you can change up his looks as you see fit. He’s also got a stand that’ll pop onto the completed rooftop diorama, so he can free-float in your display. 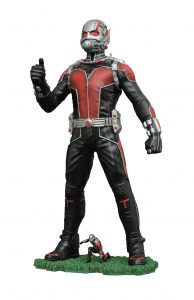 Janine is no slouch either, with a phone (natch’), take out containers, and -of course- that famous button to ring the firehouse’s alarm. We got one, and all that. Oh yeah, and unlike Slimer, she’s got a piece of the rooftop packed in as well.

As for that Avenger I mentioned, Ant Man is looming large as a PVC figure this week. The 9″ tall figure is a part of the new Gallery line from the company. He’ll fit right in with the Femme Fatales series as well, and is sculpted with his thumb on his suit’s shrinking-trigger. Making him even cooler? There’s a little crouched version of Ant Man on the base, so this is really a sculpt of him in action, shrinking down.

All of the above should be in stores as of right now, so go get ’em.

Official descriptions? Yep, we’ve got those too

Jason's been knee deep in videogames since he was but a lad. Cutting his teeth on the pixely glory that was the Atari 2600, he's been hack'n'slashing and shoot'em'uping ever since. Mainly an FPS and action guy, Jason enjoys the occasional well crafted title from every genre.
@jason_tas
Previous Death of X #1 (Comics) Preview
Next Nearly 80% of Pokemon Go Players Have Moved On.

Even though NACON and Spiders’ Steelrising has just launched for consoles and the PC, it’s …