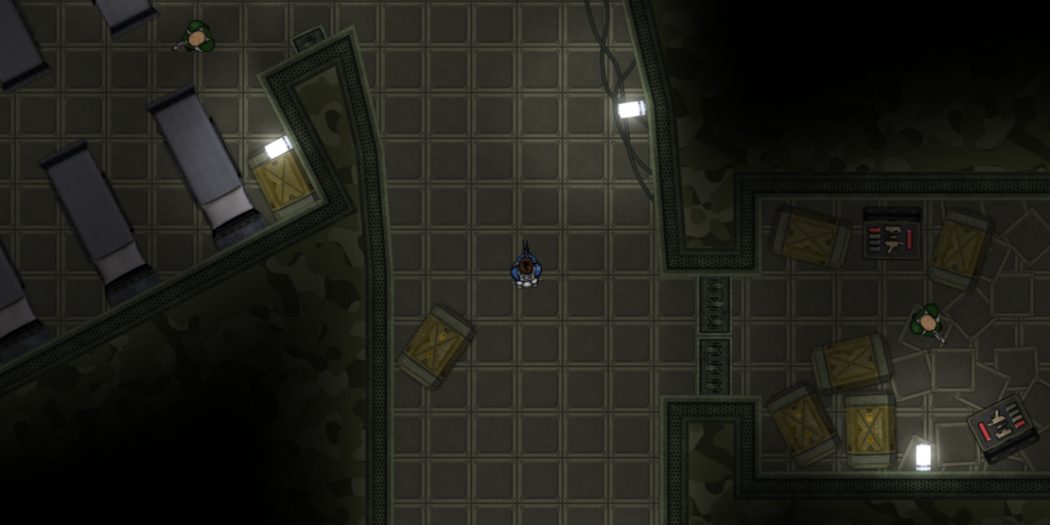 Trigger Time preview – how NOT to make a top-down shooter

When I think of quality top-down shooters, Hotline Miami will always spring to mind. Brilliant level design, responsive controls, multiple, diverse weapons and rewarding gameplay. These four things should be fundamental when it comes to any shooter, especially those created on 2D planes. Trigger Time by  Shephf ticks none of these boxes.

The menu screen is nice and simple, and I learn that I can use an in-game currency to buy extra lives, ammunition multipliers, and a better starting weapon. The game starts with a rather long cutscene for a 2D game. The scholar within me noticed typos in the dialogue boxes like a mother notices dust on a cabinet surface. The dialogue itself wasn’t particularly thrilling either, a bit like Arnold Schwarzenegger’s delivery. I’m given my mission to stop the menacing Dr. Nathan (yes, I know, he sounds about as menacing as a bowl of cheerios) and his army of cyborg mutants. I’m dropped off into a canyon by a ship that looks like it was cropped in Paint, and off I go.

The devs had the decency to tell me the controls at least, which are nice and simple. My first enemy is a turret with way too much health, then another, and another. Immediately I see that the controls are clunky. Perhaps I can adjust the mouse sensitivity in the options? Nope. So I’m playing a top-down shooter, a genre that relies on quick reactions and precision, and I can’t even adjust the sensitivity? The movement is also sluggish, and I end up walking in circles a lot trying to get a lock on my targets. 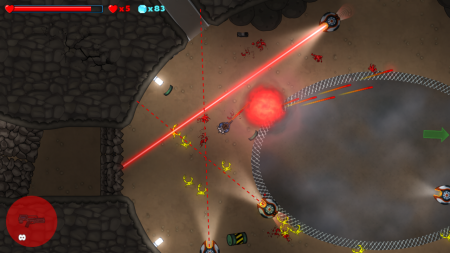 The one thing Trigger Time might have going for it is the inclusion of puzzles, which are solved through the use of the gravity gun. This tool-and-weapon allows the player to pick up and move objects in the environment and move them. I first used it to clear some boulders, and then discovered I could pick enemies up and use them as shields until they die.  The second puzzle, however, was not explained clearly. Wave after wave of robot scorpions come flying at me, and I figured out that I had to use the boulders I had just moved to block off some lasers to shut down the respawn machines. It was also at this point that I collected my first gem. Cue sound effect of a gold circlet being picked up by a blue hedgehog. I don’t care if you pitch-shift it, but that is theft of assets.

From here I accessed a lift, which took me to a platform where a shiny new shotgun was waiting for me. Finally, a chance to get rid of this next to useless spud-gun the game started me off with. Sadly, the shotgun performs poorly, and in the face of the mob that was evidently supposed to test my skill with it, I failed miserably. I was then confronted with 12 turrets, the same ones from the start of the game, positioned illogically. Why would there be three rows of four turrets on a platform? How do people walk on this thing? This is a prime example of enemies for the sake of enemies, with just enough ammo pickups to get me through. I then fight off two swarms of squid-like robots sent after me by a soldier called Skull. By this point, I lost interest in the game, which is a complete bore. shoot waves of enemies, then shoot the same but different coloured enemies. That fact that I couldn’t even make it through the first level should tell you everything you need to know about the current state of Trigger Time.

From the tender age of four, when he was given his first Sony PlayStation, Dan has been hooked on video games. He loves his RPGs more than anything, enjoys immersion and will definitely blame any FIFA losses on scripting.
@@Dan_Atlee
Previous Raw Data Climbs The VR Charts
Next Brutal Podcast 3: The Repost Edition