For 13 years, fans of Disney, Pixar, and the original Finding Nemo (2003) have clamored for a sequel. Well, a sequel has finally come, but kids who remember Finding Nemo to be an untouchable work of art may find themselves a tad disappointed in Finding Dory.

To be clear, I think that Finding Dory (2016) is a great film. It has a strong voice cast, including Ellen DeGeneres (Dory), Albert Brooks (Marlin), and  Ed O’Neill (Hank), among others. 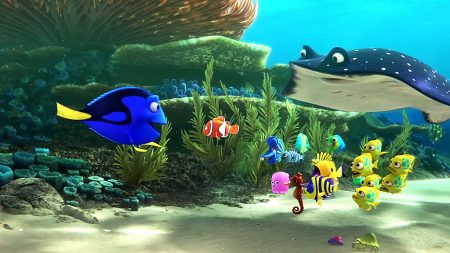 In an attempt to explain the plot with minimal spoilers, the film takes place a year after the events of the first movie. Dory remembers that she has parents, and in a quick argument with Marlin, the group sets out to find Dory’s childhood home. What ensues is a fun romp through the ocean and, eventually, a marine conservation institute.

The strongest part of the film for me was the new side characters that the main characters meet throughout their adventure. These newbies have limited and predictable growth, but all in all, they offer fun new personalities for fans to bond with throughout the film. Also, while being side characters, they feel to me as though they were actually in the film for more minutes than the returning Marlin and Nemo.

More fun than a tank full of fish

The film had a huge stock of laughs. As a comedy that is targeted towards children, a lot of the jokes were just about what you would expect them to be. The comedic situations and laughs that arose felt like a lot like the situations that the characters in Toy Story frequently deal with.

Many of these characters’ problems are really due to them being fish in an intricate marine institute however. Too many of the film’s conflicts arise because characters need to be somewhere and don’t quite know how to get there. This is fine at first, but as the movie wears on, it becomes a little bit of a slog.

The situations that Dory and crew are placed in never feel out of place for me though. Given the nature of the film and franchise, the most out of place scene comes during the climax. Without spoilers, it is only really safe to say that things really go off the rails, outside of both the ocean and the institute. It wasn’t awful, as the ending of the film worked for what the movie was, I only wish it turned out a little bit differently.

It would be impossible to talk about Finding Dory without mentioning the superb animation. Every scene is animated beautifully, and I could not be happier with the job done by Pixar in bringing Dory and friends to life again. 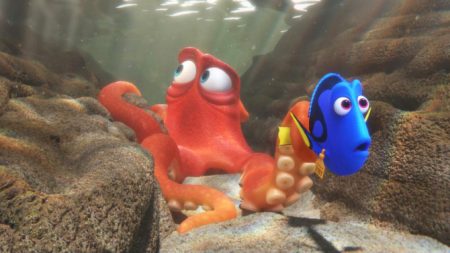 Minor gripes aside, the entire movie is a wonderful ride really. I felt like a little kid again watching Finding Dory. It is totally possible that those feelings only come from nostalgia for the brand, but something tells me that isn’t it.

There are valid complaints to be made regarding the film: characters find themselves in unbelievable situations and consistently get out easily, Dory’s memory loss moves from very frequent to basically nonexistent, and characters from the original movie seem to be relegated to comic relief status.

These are all things that the movie could really do better with, but honestly, it doesn’t need to. Throughout the film, I had a big, dopey grin on my face, wondering where the story was going next. We may not have gotten the finely crafted masterpiece that people remember Finding Nemo as, but Finding Dory is a worthy successor to the Pixar created franchise.

Finding Dory combines lovable side characters and new situations to bring us the sequel we wanted in the fish centric adventure.

Erich was introduced to gaming by his grandfather before he could walk. Since then, he has grown up loving Nintendo and most games in general. He couples his love of videogames with journalism to cover news, provide reviews and tell it how it is in the gaming world.
Previous Pokemon Sun and Moon Steel-Book Edition Announced
Next We’re streaming Tom Clancy’s The Division on Twitch