Some games crowdfunded on Kickstarter are amazing. Some games are not. Anima: Gate of Memories falls short of being considered “good.”

Anima: Gate of Memories is a third-person action RPG in which the player controls two characters in one body.  The protagonist, only known as The Bearer, is forced into a contract with an ancient demon, Ergo.  The two are destined to get caught up in a plot of darkness unraveling in the world around them.

Turning a tabletop roleplaying book into a videogame is no easy feat.  Anima Beyond Fantasy features several tabletop books, miniatures, and cards in many languages around the world.  Edge Entertainment and Anima Project teamed up on Kickstarter to bring their game to the virtual world by raising over $110,000 to develop the project.  The Kickstarter was incredibly successful with exciting rewards offered to those that backed the project.  Unfortunately, even with the support from its original fanbase, Anima: Gates of Memories falls short of delivering an entertaining, polished game for several reasons.

Despite the awkward and rather repetitive controls 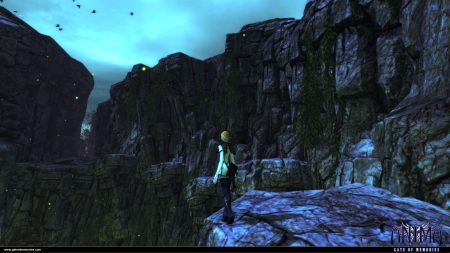 , the gameplay is probably the best thing about Anima: Gate of Memories. There are plenty of challenging puzzles the player must overcome.  These puzzles are incredibly challenging but provide an element of self-achievement in an otherwise frustrating game.  There are several spells to add flavor into the otherwise dull, repetitive combat system.  There are also dozens of items and consumables to assist your character throughout the world, but I often forgot to equip or utilize the system entirely.

It is worth noting that one of the more frustrating elements in the game are the invisible walls.  While the game is massive and offers an open-world feel, it is hardly open world. You’re limited in the places you can explore and jump on.

Despite a talented art team, Anima remains inconsistent in its graphics.  Character designs for the protagonists are rich, while NPCs are seemingly thrown together and feel misplaced.  There is something lost in translation from the Kickstarter art to the digital art of the world.

The world is fairly decent.  There are enough details to understand where you are during certain maps and fits quite well with the supernatural horror theme it goes for.  Although dark and dimly lit, the atmosphere in the game’s setting helps set the tone for the overall seriousness of the story. This is one of the best features about the game.

From what I was able to play, the story is very in depth.  When you first begin the adventure, information trickles in slowly.  You are expected to know how to manage your characters and the creatures you’re fighting against.  A massive war in the shadows begins to unfold with the protagonists caught in the middle.  As the story progressed, it became clear that there are several options for you to choose. Each action you make impacts the story itself.  While you explore one part of the world, you are directly affecting which quests appear to you.  Sometimes you start quests unintentionally before finishing a different quest!  Intriguing at best and confusing at worst, Anima: Gate of Memories could be stronger with character development.

Let’s talk about the main characters for a moment in Anima: Gate of Memories.  The Bearer is nameless due to the pact she was forced to make with Ergo.  With a great disdain for magic, she seemingly hates her own life as she must wield this ancient magic from the pages of Ergo’s book in order to do anything in the game. The dichotomy of her personality appears incredibly forced, as she also craves for normality.  She is, however, a far more fleshed out character than her incredibly creepy counterpart, Ergo.

Ergo is that stereotype of a creepy molester hanging out in the back of the bus breathing down your neck while trying to catch a glimpse of your cleavage while you sit there reading a book.  No. Seriously. There is absolutely nothing endearing, sentimental, or even remotely creative about writing a character that grossly refers to the main character as, “babe,” and frequently makes disgusting remarks about touching her while she sleeps.

There is a level of disappointment in learning that yes, this is exactly the type of character someone thought was appropriate to write:

“Ergo’s personality is very charming in his own particular way. He is an egocentric foulmouthed character who craves attention. He loves making cynical comments only to disturb The Bearer,” (From the Kickstarter page).

There is nothing charming about Ergo.

To add insult to injury, the voice acting is atrocious.  Sometimes the acting is tolerable. For the majority of the game it sounds like the voices are recorded by brand new voice actors making their debut in a basement studio.  (I’m no audiophile, but the recording of sound is grossly unbalanced.)  Characters often change tone and pitch without rhyme or reason.  Ergo’s voice fluctuates and changes more than the weather in Chicago.  He is, by far, the worst voice in the entire game.

Overall, Anima: Gate of Memories held the potential to be a really fun, truly unique action RPG that got a big push from Kickstarter.  Unfortunately, the game lacks consistency.  It is difficult to decipher what is important and what is not in regards to the story.  Challenging puzzles are the game’s best feature, but are overshadowed by atrocious voice acting and the mixed art style.

I really, REALLY wanted to like this game.  With an exciting story and beautiful artwork, my expectations were high.  Sadly, the game fails to deliver in almost every area important to a game.  I’d file this one under “wait for a Steam sale.”

Anima: Gate of Memories is available on PC, PS4, and Xbox 1.

While I wanted to enjoy this game, I simply could not. With terrible camera angles, dreadfully painful voice acting, and inconsistent -everything-, this game is best purchased during a Steam sale.

Gnome (Joey) is a paramedic, gamer, and geek extraordinaire. Currently, he attends Arizona State University in pursuit of a BS in Technical Communications with a minor in Media Analysis. When he's not being a real-life healer, he plays one in various games like Overwatch, World of Warcraft, Dungeons & Dragons, and more!
@gnomedic
Previous Duel Wielding Hero, Khaimera, Joins Paragon’s Cast
Next The Spider-Man Clone Saga returns as the Clone Conspiracy unravels