Is Angel an agent of Apocalypse once again? The Apocalypse Wars heat up in Uncanny X-Men #6. 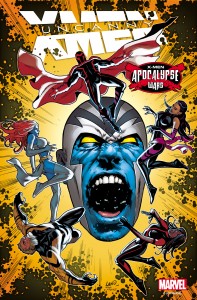 This April, the secrets of Archangel will be revealed as Magneto and his team prepare for war. Today, Marvel is pleased to present your first look inside UNCANNY X-MEN #6 –  the start of the Uncanny X-Men’s foray into Apocalypse Wars! Writer Cullen Bunn and artist Ken Lashley take you on a mission to save the life of one of the founding X-Men!

Years ago when Archangel first met Apocalypse, he was transformed into the homicidal Horseman of Death. Now, years later, it appears he may be again returning to that form. Psylocke has discovered a vacant, drone-like Archangel in the guise of Death once more. Fearing the worst, that her once lover is under the control of Apocalypse – she and the rest of the Uncanny X-Men embark on a mission to save Archangel’s life. But what they are about to uncover is far more horrifying than they could have imagined…

The quest for Archangel begins this April as Apocalypse Wars comes to UNCANNY X-MEN #6!

As the release above states pretty plainly, this is just the start of Apocalypse Wars, the big X-Men event hitting Marvel’s universe this Summer. The storyline is set to intrude in pretty much all the ‘mutant’ books from the publisher, with what I think might be the first ‘X-Men only’ event in a few years.

It’s looking like a good one too, with Magneto, Psylocke, and Angel all seemingly having big roles to play. As a big X-fan myself, I’m more than a little interested to see where all this is heading too. That description is pretty intriguing and seems to indicate a little retconning with some new secrets emerging about the dagger-winged creation of Apocalypse.

Could be one not to miss.

Apocalypse Wars strikes in Uncanny X-Men #6, fresh from the team of Cullen Bunn and Ken Lashley, on April 6th.

Jason's been knee deep in videogames since he was but a lad. Cutting his teeth on the pixely glory that was the Atari 2600, he's been hack'n'slashing and shoot'em'uping ever since. Mainly an FPS and action guy, Jason enjoys the occasional well crafted title from every genre.
@jason_tas
Previous A moment of silence, as the Chameleon sure looks dead
Next Previews announces trio of exclusive new Medicom DC action figures