Home / Action Figures and Toys / Toy Fair 2016: One:12 Collective takes over at Mezco

Do you like Marvel and/or DC Comics? Then you’re going to fall all over yourself when you see what Mezco is cooking up with their One:12 Collective line for 2016. 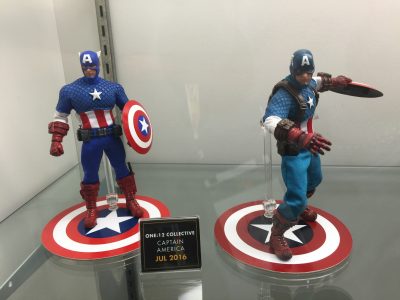 Coming at you in 2016 are some of the coolest comic book hero figures pretty much ever. Immediately recalling the classic Mego figures (for me anyway), but obviously way more detailed, the One:12 Collective has taken off and doesn’t look like it’ll be touching down any time soon.

Both Marvel and DC heroes are a part of the line, with DC movie figures included as well – including a massive Batman v Superman batmobile. Seriously, that thing is freaking awesome, is sized to the One:12 figures, and will indeed have lights aplenty. There’s no price on it just yet, but you can expect it to be on the pricier side and probably arrive some time in 2017.

As for the rest of the figures, well, have a look and try not to be impressed. This is some awesome stuff, with Captain America, Daredevil, Punisher, Flash, Batman, Superman and more all present and ready to be added to your collection.

Scroll on down for a full look at all of them, plus the Star Trek: The Original Series figures (which may see a Next Generation expansion if they do well), and even Space Ghost!

Jason's been knee deep in videogames since he was but a lad. Cutting his teeth on the pixely glory that was the Atari 2600, he's been hack'n'slashing and shoot'em'uping ever since. Mainly an FPS and action guy, Jason enjoys the occasional well crafted title from every genre.
@jason_tas
Previous The Walking Dead Recap: 609 “No Way Out”
Next SEGA 3D Classics Collection sticks it to you with some rad stickers