Home / Comics / Deadpool squares off against Sabertooth next month

Deadpool squares off against Sabertooth next month

Not the most historic of Marvel Comics rivalries, but it’ll be swords against claws as Deadpool battles Sabertooth in Deadpool #8. 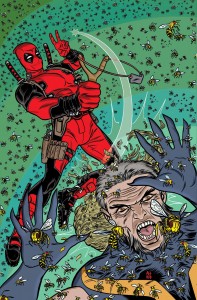 This March, the Merc With a Mouth takes on the Uncanny X-Men’s hairy, clawed, feral mutant! No, the other one. Today, Marvel is pleased to present your first look at DEADPOOL #8 – the first chapter of “Deadpool vs. Sabretooth”! Writer Gerry Duggan and incoming artist Matteo Lolli (Hawkeye vs. Deadpool) bring you the explosive next chapter in Wade Wilson’s life! Deadpool has no idea that he was responsible for his own parents deaths. Only problem is, he’s sworn vengeance on the one responsible. And he thinks Sabretooth did it. This is gonna be a messy. The fireworks begin this March in DEADPOOL #8!

Yeah that sounds about right for Wade. Deadpan couldn’t be hotter at the moment either (and I don’t mean his looks), so this is a great time for the Merc with a Mouth to get a big time guest star with Sabertooth.

‘Tooth has sort of turned his life around in the current Marvel U too, fighting along side the X-Men against them since the death of Wolverine (not to be confused with Old Man Logan). With that in mind, it should be interesting to see how he handles Deadpool, who’s more confused than anything else at present.

Plenty to like here if you’re a fan of either, though I’d imagine that Creed is probably going to be dumped on more than a little in this one. Deadpan #8 hits stands and digital download storefronts on March 2nd from the talented team of Gerry Duggan and Mateo Lolli, with cover work from Mike Allred.

Jason's been knee deep in videogames since he was but a lad. Cutting his teeth on the pixely glory that was the Atari 2600, he's been hack'n'slashing and shoot'em'uping ever since. Mainly an FPS and action guy, Jason enjoys the occasional well crafted title from every genre.
@jason_tas
Previous The end is here in the latest X-Men: Apocalypse trailer
Next Red dead Redemption is out on Xbox One! Oh wait, no it’s not.