Fight for control as you seek fortune and fame in Warhammer’s City of the Damned.

Welcome to Mordheim, an Empire city around 500 years before present day in Games Workshop’s Warhammer timeline. There is no sitting emperor at present, and multiple factions are vying for control of the territory when a giant twin-tailed comet is sighted; a comet which is prophesied to signal the return of the god Sigmar.

Sigmar’s return was said to restore glory and prosperity to the empire, bringing in a new age. As Mordheim became overrun with journeyers seeking the comet, the city took a turn for the worse. Overpopulation led to lawlessness and depravity. Anarchy was everywhere, and then the comet fell, smashing into the city and killing anyone who had gathered near it. What was left were pockets of Wyrdstone, a mystical stone reputed to have all kinds of supernatural powers.

People were paying incredible prices for these stones. Enter our four rivaling war bands (that you can choose form in the game): the Human Mercenaries, the Skaven clan of Eshin, the Sisters of Sigmar, and the Cult of the Possessed. It’s these four groups that battle each other as they scavenge the Empire, in search of power, glory… and Wyrdstone. So that’s the setup for the action in Nordheim: City of the Damned, which is actually really cool; now lets dive into the game itself. 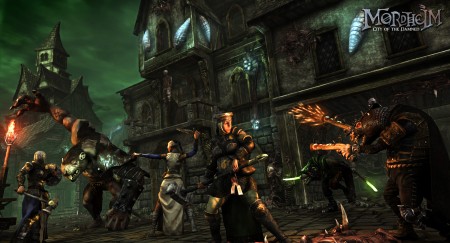 The look and feel of Mordheim: City of the Damned has no problem drawing you in. The developers have definitely paid attention to detail and, playing out from a 3rd person view, the weapons and armor are quite detailed.

The environments are amazingly immersive as well: the gloomy skies give you the definite feel that you are in serious trouble. Though I should also mention that the variations of characters appearance per warband can feel a bit stifled depending on which warband you choose.

I chose the Sisters of Sigmar, and while my leader and hero stood out, there were only two models for my henchmen, which led me to confuse them for one another, until I had the opportunity to fit them with differing armors.

You’ll start your journey with a warband of five characters by the way: a leader to guide you into the fray, a hero to champion your cause, and three henchmen to lend their skills. Different characters offer various abilities, and as you gain experience, you can expand your party. The gameplay of the 5-0n-5 or 5-on-6 scenarios are not too bad, though it gets rather hairy when you are faced with a 5-0n-1o barrage (which does happen).

Before I really knew what I was doing, my Sisters of Sigmar had suffered two amputated arms, the loss of an eye and one permadeath (yep, permadeath). I almost restarted my game, when I started to get the hang of things. When it was all said and done, my warriors looked like they fit their role, and I would not want to meet them in any dark alleys. 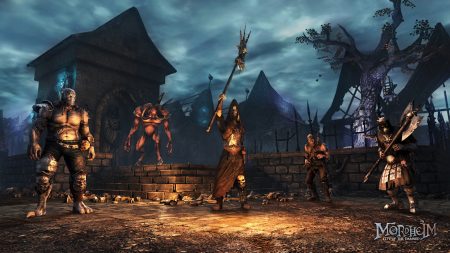 Slight learning curve aside, the game is not without its flaws. I noticed in several locations the geometry was encountering a flickering glitch, characters disappeared and reappeared with no explanation, and on one occasion, an opposing leader was stuck intersecting with the geometry around it.

This led the campaign to end without the goals being met, ending in defeat. Were it not for this glitch, I could have obtained the charms needed and continued on my way. By no means are these huge issues, but they do have a way of generating complaints.

There’s also not a lot to say about the soundtrack here. The people over at Rogue Factor did a good job at finding some dramatic theme music that helps you feel the intensity of being in battle, and yet does not distract from paying attention to which spell you want to cast first. 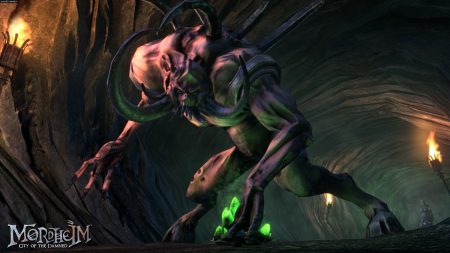 As for replay value, I expect that Mordheim will get plenty of replays. Given the amount of differences in the warbands, as well as your choices in weapons, spells and skills, you should have no problem loading the game back up for a drastically different experience than what you had in your first playthrough. Will you control a band of warhammer-wielding nuns, men with blunderbusses or do you prefer possessed demons? Personally, I might have to try the Cult of the Possessed next.

While it took me a while to get into Mordheim: City of the Damned, I am glad that I did. I was a huge fan of the old tabletop-based RPG games such as Dungeons & Dragons, and this definitely brings me back to a happy place.

There are some minor bugs here and there, but if tactical RPGs and turn-based action games are your thing, you’re probably already watching for this release. If you’re not into tactical RPGs though, this may not be for you. Be forewarned that many hours can disappear while trying to gain control of an empire.

Pick up your copy of Mordheim: City of the Damned for the PC on Steam for $39.99

A fan of media on multiple platforms, I am always watching or playing something! Who knows what I will be on to next?
@mackeyp42
Previous Stella Glow (3DS) Review
Next Upcoming Deus Ex title delayed to August