Arguably the biggest and most important franchise on the Xbox, Halo returns for a fifth numbered installment. And while it’s definitely different than what’s come before, it also hits all the right notes for the franchise. 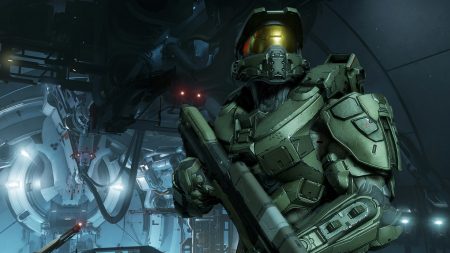 Halo launched the Xbox as a force in the video game world, and it’s more or less been the flag-bearer for the brand since it was born on the original Microsoft console. Since then, the franchise has been through a few changes, and (especially with Halo 5) completely moved on from the original narrative. What’s stayed more or less the same though is the multiplayer, which is still extremely popular.

But more on that aspect of Halo 5: Guardians in a minute, as there’s a brand new direction that starts here with this game and I would be doing the game a disservice if I didn’t talk about that first. In Halo 5 the familiar character of Master Chief John 117, the Spartan super-soldier that’s always been the lead figure in the Halo universe, kind of takes a backseat to a newcomer and some returning favorites.

I don’t think it’s spoiling too much to say that Halo 5’s cast reads like an all-star roster of Halo greats. Actor Nathan Fillion’s Buck returns from Halo: ODST, The Arbiter shows up yet again in a pretty major (albeit non-playable) role, Spartan Sara Palmer appears, and The Chief’s Spartan teammates that die-hard Halo fans will probably know from the expanded universe novels finally make their presence felt in a game. 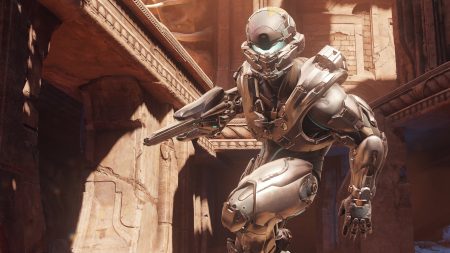 And there are the newbies like Spartan Locke. Interestingly enough, it’s Locke that you get to control for the majority of Halo 5. It’s not that the Chief is set aside really, as his storyline runs concurrent with Locke’s, but it’s from Locke’s perspective that you see most of the game, with the Chief popping up to fill in the gaps of the narrative.

To be honest, that was a sticking point for me. Even though I came to like Locke just fine, I didn’t like him as much as the Chief. It would have been kind of hard to, since the Chief had been the main player-character since the beginning and he and fans and been through quite a bit together. By the game’s close, that one-sidedness had kind of changed a tad, but at first I was definitely taken aback by how different things were.

As to that story, it’s different too, really different for a Halo game. Yes, the alien-assembledge that’s known as the Covenant is still around and controlled by the Sangheili (Elite) Jul ‘Mdama. This time though, it’s considerably weaker than ever, and being generally routed by The Arbiter and his forces, who are fighting for a Covenant-free Sangheilios, which is the Sangheili homeworld. 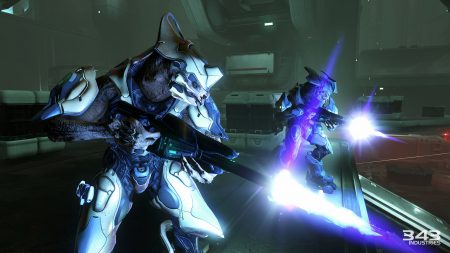 Although weak in comparison to past installments of the Halo series, the Covenant is still a pretty big threat in Halo 5 and you’ll fight them plenty through the campaign, but they share the villainous role with the Forerunners. For a good chunk of the time that you’re playing the campaign in fact, Knights, Soldiers, and Crawlers will make up the bulk of the opposition- led by the new character of the Warden.

The less said about him the better, as it’d spoil a ton of the story, which has been kept under wraps to a startling degree. He’s honestly pretty cool, and introduces a new Forerunner element to the game that hasn’t been seen before and seems as though might play a larger role in games to come.

So yes, if it sounds like there’s a lot going on here, there really is. Somehow all the threads come together nicely however, and coalesce into a solid story that will definitely be extending into Halo 6. In some ways the campaign, and I don’t mean this in a completely negative way, actually feels like it serves to set up the next game first and foremost. Don’t get me wrong, the narrative is quite impactful, but there are few answers here, and what does come to light is pretty quickly replaced by an even greater mystery.

By the way, I haven’t really even touched upon the actually antagonist of Halo 5 in this review. It’s something of a surprise, and if you’re like me and have avoided spoilers before diving into the campaign, I think you’ll be pretty surprised as to who it is. It’s a twist that gives meaning to the game’s subtitle, and one that I certainly didn’t see coming. It also changes the Halo universe in a major way and has monster complications that will play out in future installments; I’m leaving it at that.

Since I really don’t want to say any more, let’s move away from the story and into the nuts and bolts of things – the a/v package. 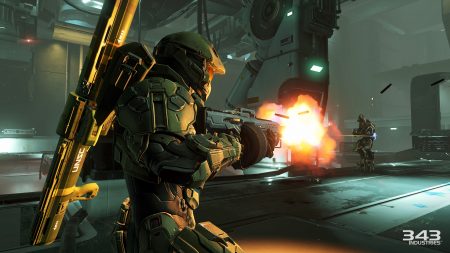 Halo 5 represents the biggest jump in graphics that the series has seen maybe ever. I actually can’t remember being this impressed with the looks of a Halo title since the original. There are lots of those ‘big’ moments, once like the part in the original where you exit the Pelican on the original Halo and see that big arc of the ring heading off into the distance. The game hits all the right ‘Halo’ notes; it’s bright and colorful in parts and cold and sleek in others, with downright stunning outdoor scenes. Everything just looks that much better than it has at any point before.

Installations left behind by the Forerunners are uber-detailed, as are jungles and swamps, and even the rocky terrain of the Sanghilli homeworld I mentioned earlier. This is just a flat-out beautiful game. And it sounds great too.

The acting is, as you might imagine, fantastic. Sure you have the steely tones of Steve Downes as the Master Chief, but you’ve also got Ike Amadi doing a fantastic job as the Chief’s hunter Spartan Jameson Locke. Supporting them is Nathan Fillion, as I mentioned above, as well as Keith David, Jennifer Hale, Gideon Emery (who does an awesome job), and of course – Jen Taylor as Dr. Halsey and… Cortana. Ahem. 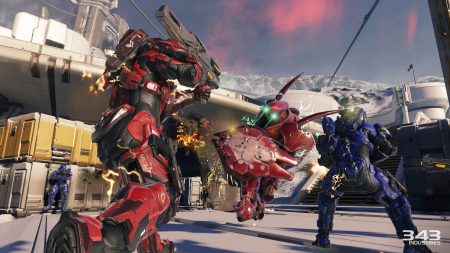 Much like the voice acting, the music is phenomenal. It’s a return to the classic Halo score in part, and that’s an awesome thing, especially if you’re a longtime Halo fan. There’s no exception for that chanting, and it’s great to hear it again.

One more big change for the game comes in the form of the controls, as this time you have some little improvements that make a big impact like mantling over ledges, and tactical control over your AI companions. As you might have realized by now, unlike in past Halo titles where you can be joined for a co-op experience, Halo 5 is all about that dynamic. So even if you don’t have any buddies to play with, you’ll still have three squad-mates all throughout the game, whether playing as Chief or Locke.

And with a team, comes a mechanic for issuing orders to them. Fortunately, this is painfully simple and well-integrated into the otherwise fast-paced and decidedly ‘shooter’ gameplay. With a press of the D-pad, you can order one of the Spartans under your command to move to position, take over a vehicle and pilot it into combat, or focus fire on an enemy. You can also direct them to revive you or a teammate, which comes in handy plenty in battle.

All of this of course, is limited to the single player campaign. The multiplayer, which has become so lauded over the years, is more of a bare bones experience. Personally, I stopped being enamored with Halo’s multiplay with Halo 2, so I wasn’t all that excited to dig into what Halo 5 had to offer.

While I went in thinking one thing though, I certainly changed my mind. I still don’t really care for chatting with strangers online while taking shots at each other, but man is everything else in Halo 5’s multiplayer right on the money. 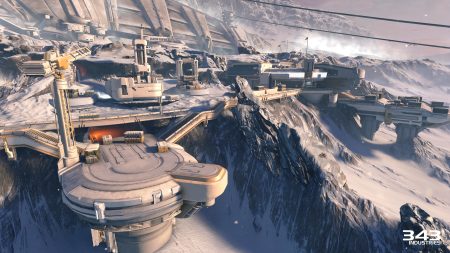 Featuring something new in the form of the REQ system, players can now accrue points as they play online, and then spend that virtual cash on power-ups, weaponry, and other things. This can shake up the action nicely and in a ton of strategy, since you’ll need to carefully figure out what you need to have in your arsenal to win.

As far as modes go, there’s a very solid assortment of them. You’ve got what you’d expect there to be, like Slayer and Capture the Flag, but also something new in Warzones. The Warzone maps are absolutely massive (way bigger than other Halo maps) and contain some of the biggest battles to ever be seen in Halo’s multiplayer suite.

With up to 24 players battling at once, you’ll face off against not only other gamers on opposing sides, but also NPC’s that wander the battlefield. Yep, there’s computer controlled baddies to fight here, and defeating them will net you point bonuses. That’s one of the ways that you can win in the Warzone by the way, so fighting them is anything but a waste of time. 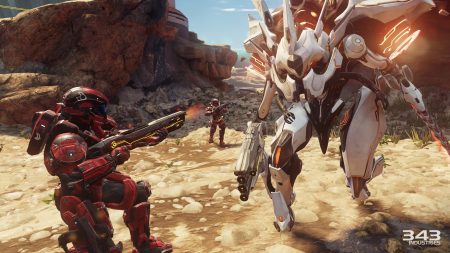 Given the length of this review, I’d imagine that you’ve probably just skipped on down to the Final Thoughts. And if that’s the case, then I’ll get right to it and let you know that Halo 5: Guardians is a fantastic shooter and a great next step for the franchise.

It’s a surprising next step too, with the campaign focusing on Spartan Locke instead of the Chief (which I wasn’t terribly enraptured with) and the introduction of a new enemy, one that most definitely will change the whole of the Halo storyline for at least one more game. And presumably, that’ll be a game that features John-117 a little heavier.

Add on to all that an excellently revitalized multiplayer collection of modes that features the awesome Warzone, and you’ve got a title that’ll keep you very busy long after playing through the 15 chapter campaign.

Jason's been knee deep in videogames since he was but a lad. Cutting his teeth on the pixely glory that was the Atari 2600, he's been hack'n'slashing and shoot'em'uping ever since. Mainly an FPS and action guy, Jason enjoys the occasional well crafted title from every genre.
@jason_tas
Previous Mezco’s One:12 Collective Lawmaster bike is ready for pre-order
Next Fallout 4 (Xbox One) Review