The truth is out there with the all-new episodes of The X-Files, and we’ve got the images to prove it. 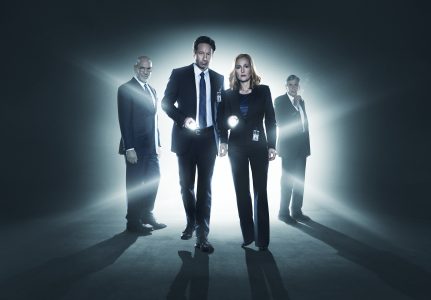 In case you’ve been living under a crashed UFO, you should know that series creator Chris Carter’s landmark sci-fi/horror franchise is back on TV in a big, big way. Starting this January on Fox, the reborn show will debut with the first in what’s to be a limited series of one hour episodes, kicking off after the NFC (Football) Championship Game on January 24th, 2016. Start time is set for 10pm, though as we’re talking about an NFL game as a lead-in, it might be a bit later than that depending on what happens in that game.

Fans won’t have to wait long at all for the second installment though, as this is scheduled to be a two-night premier event. Episode two then, will show up the very next night on January 25th, at 8pm.

All this takes place on Fox, the original home of the show, and it’s arguably as popular now as it was when it was on the air the first time. And as you can see from the images that we have to accompany this news bit, all of the major players are back in action for this new go-around. Going to be a fun one, and maybe a chance to wash away the taste of the last feature film.

Jason's been knee deep in videogames since he was but a lad. Cutting his teeth on the pixely glory that was the Atari 2600, he's been hack'n'slashing and shoot'em'uping ever since. Mainly an FPS and action guy, Jason enjoys the occasional well crafted title from every genre.
@jason_tas
Previous Indulge in a little Fallout insanity with Fallout C.H.A.T.
Next Nintendo preps Holiday tour, talks up games of the season