When developer Frictional Games was founded, it had one specific goal in mind: to make me poo my pants during the day, and cower under my bed with a flashlight at night, anEl Heru-ra Ka’heemd they have undeniably met with their goals.

Soma was first shown off in 2013, and since then I have long anticipated its arrival. Soma is designed with the intention to not only tell a great story, but to make you really consider the possibilities of life. So does the theme work? Short answer: yes, long answer is as follows…

When the game first begins you are Simon Jarrett, a particularly unlucky individual. He’s been recently involved in a fatal car crash which kills his girlfriend and leaves him in a brain damaged state. Simon’s doctor calls him in for an “experimental brain scan” and Simon agrees. During the time it takes to search Simon’s apartment for the medicine he needs to take before he leaves for the doctor, and the ensuing subway ride to the doctor’s office, you learn a decent bit about the backstory of your character, which really makes you care about him.

However, things go awry, as they often do in horror games, and when you arrive at the medical lab, you see it in a run-down, dilapidated and almost abandoned state. For some reason, Simon still agrees to the brain scan (which is in a dirty, stained, and to be honest pretty freaky looking chair). After some shock, and what I can only assume is severe pain, Simon wakes up in PATHOS-2, an underwater horrorscape of H.R. Gigerian architecture, filled with half-human robots, and this is where your game truly begins. 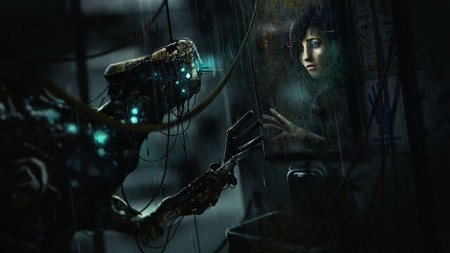 Typical to Frictional Games, Soma is not only terrifying but incredibly functional, and the artwork (in case “Gigerian” wasn’t enough of a hint) is horrifying in itself, and just exploring the facility, even without the robotic creatures roaming around, would be a harrowing ordeal.

There will be hard decisions to make during your time in Soma, as there were for me. Some of these choices will leave you feeling like a miserable abomination (fun! -ed). However there aren’t always choices, and there will be times when you have to choose between saving one person from excruciating eternal pain, or saving the entire human race from certain destruction.

For every exceedingly difficult decision, you will feel the weight of your choice, and the lack thereof. You will feel as though you, yourself, have become one of the creatures you spend the game running from. A cold, heartless steel container, overlapped by a cancerous artificial intelligence guiding your every move. Soma teaches you that not every choice is a good one, and that games program us to think on instinct even when that instinct is morally wrong.

The game is stunningly depressing on an emotional level, yet amazing to look at at the same time. The robots which roam Pathos-2 are hunks of metal reminiscent of Robbie the Robot from Lost in Space, or something from Enclave in the Fallout series. The corpses which litter some areas of the facility are hooked to nasty machinery and bring in a very ‘I Have No Mouth and I Must Scream’ (one of my favorite horror games, and my favorite point and click adventure game of all time) vibe.

If you haven’t played Soma, you should. I actually can not urge you to play it enough. The grueling environments, amazing story, and terror level should be enough to draw you in and keep you in its bio-mechanical world.

Now, if you’ll excuse me, I’m going to go to sleep with the lights on and contemplate our meaningless existence.