Bludgeoning gamers for a third time (more if you count the ‘spinoff’ and the original), Dark Souls III has been dated and is on the way to consoles and the PC in the Spring. 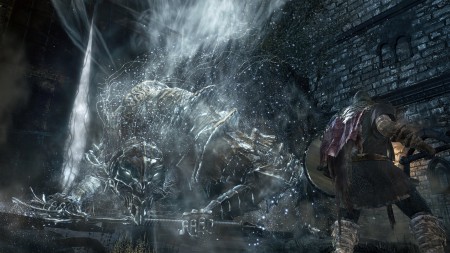 Flowers, leaves on the trees, warm weather… questing into the heart of darkness and getting killed over and over again- these are the things we think of when we think about Springtime. Well, maybe not that last one, though if you’re a fan of Bandai Namco’s brutal series of sword and sorcery titles, then that’s exactly what you’re going to be thinking about and then playing when the calendar turns to Spring in 2016.

Announced at the Tokyo Game Show last week, FROMSOFTWARE’s third Dark Souls title will indeed be question onto the PS4, Xbox One, and PC in April. The developer is promising more of exactly what you’d want from another Souls game, including “an all-new world filled with heinous enemies, hidden secrets, and captivating environments as they search to destroy the awakened Lords of Cinder and discover what has happened to this apocalyptic land.”

You can expect all of the above, plus the usual assortment of weapons and armor to equip your character with, and the all-new Skills, which serve to enhance weaponry and give you more of a fighting chance. And that’s a very, very good thing, as anyone who’s played a Souls game could probably relate.

Jason's been knee deep in videogames since he was but a lad. Cutting his teeth on the pixely glory that was the Atari 2600, he's been hack'n'slashing and shoot'em'uping ever since. Mainly an FPS and action guy, Jason enjoys the occasional well crafted title from every genre.
@jason_tas
Previous SOMA tells a dark tale in new trailer
Next Talia Al Ghul joins DC’s Femme Fatals line, exclusively at Entertainment Earth