Home / Comics / Gwenpool? Yep, Gwenpool is coming to the Marvel U.

Gwenpool? Yep, Gwenpool is coming to the Marvel U.

I’m at something of a loss to explain this one, so maybe just click through and read the press release on Gwenpool. 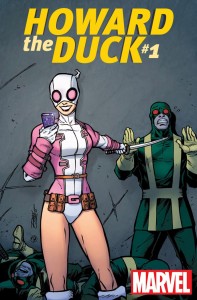 Your eyes do NOT deceive you, True Believer. She’s real, and she’s making landfall in the Marvel Universe this November! Introducing…GWENPOOL! Making her thunderous debut in November’s HOWARD THE DUCK #1 – meet the character that’s already taking the world by storm!

She’s smart, she’s charming, and she can shoot and stab her way through a gaggle of Hydra goons before you know it! And she’s coming to our universe for special backup stories in HOWARD THE DUCK #1 – #3 – written by Christopher Hastings with art by Marvel newcomer Danilo Beyruth! A stranger in a strange land, she’ll enlist the aid of someone who knows a thing or two about being from an alternate universe – Howard the Duck! Now birds of a feather, the Marvelous Mallard is about to show Gwenpool the ins and outs of her new home – the All-New, All-Different Marvel Universe!

Then, tis the season in December’s GWENPOOL SPECIAL #1 – as the biggest creators and biggest heroes from across the Marvel Universe band together for holiday cheer! She-Hulk throws a party and invites the entire Marvel U! Deadpool and both Hawkeyes – Kate & Clint – team up to take down a holiday pickpocket! Ms. Marvel battles her most dangerous threat yet: the holiday blues! And of course, the woman of the hour, Gwenpool herself! Featuring Gerry Duggan, Charles Soule, Christopher Hastings, Danilo Beyruth, Langdon Foss, Gurihiru and more – this is one you won’t want to miss!

She’s here, and she’s ready to slice and dice her way into your heart – literally. Don’t miss her exciting debut and origin in the HOWARD THE DUCK #1 – #3 beginning this November and pick up GWENPOOL SPECIAL #1 this December!

I’m not sure we need another ‘Deadpool’ running around in the main Marvel U, let alone one that is (for some reason) also Gwen Stacy. I mean, might it not have been a better idea to just bring ‘Spider-Gwen’ into the mainstream Marvel Universe?

Apparently, she’s part of the fallout from Secret Wars, which kind of makes sense I suppose since there are a load of characters being brought over from that. Still though, it’s just… odd. Anyway, look for her to be added to Howard the Duck comics this November in the book by Chip Zdarsky, Christopher Hastings, Joe Quinones, and Danilo Beyruth.

Jason's been knee deep in videogames since he was but a lad. Cutting his teeth on the pixely glory that was the Atari 2600, he's been hack'n'slashing and shoot'em'uping ever since. Mainly an FPS and action guy, Jason enjoys the occasional well crafted title from every genre.
@jason_tas
Previous Apple notes from the recent iPhone/iPad event
Next Disney Infinity 3.0 (Xbox One) Review