Home / 3DS / Two for the kids, Garfield and Paddington hit the 3DS today

Two for the kids, Garfield and Paddington hit the 3DS today

Landing on the Nintendo 3DS today are a pair of games for the younger set with Paddington: Adventures in London and Garfield Kart. 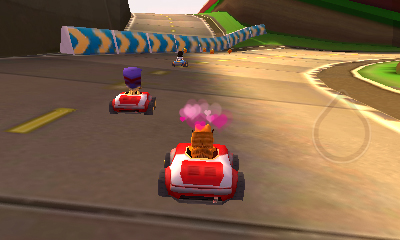 First, while I’ve not played Paddington, I have played Garfield Kart on mobiles and I had a pretty great time with it. Yes, it’s probably more aimed at kids, but I’m a pretty big Garfield fan from way back, so I had fun. If that’s you too, then I imagine that you’ll want to at least take a look at this one.

As for Paddington, well this is an adventure game where you’ll be solving mysteries (and plenty of puzzles) in jolly old London town. Here’s the official press on both games:

In the first of the two games, Paddington Bear arrives in London in order to find explorer, Montgomery Clyde. During his adventure, players must help Paddington and the Brown family solve a series of engaging and playful mysteries. Along the way he interacts with memorable Londoners, works with the police to catch thieves, solves puzzles given by his Aunt Lucy and satisfies his love of marmalade sandwiches.

In the second of the two titles, Garfield Kart, players can enjoy 3D racing action with the worlds most famous cat or popular characters such as Jon and Odie. The game features multiple single-player racing modes including Quick Race, Championship, and Time Trial. Unleash weapons such as the Cuzzzhion to instantly put the competition to sleep and take the pole position in the funniest racing game on Nintendo 3DS.

The titles are both available right now, and can be had for $29.99 USD each.

Jason's been knee deep in videogames since he was but a lad. Cutting his teeth on the pixely glory that was the Atari 2600, he's been hack'n'slashing and shoot'em'uping ever since. Mainly an FPS and action guy, Jason enjoys the occasional well crafted title from every genre.
@jason_tas
Previous Sony to Raise PS Plus Subscriptions in Europe
Next DC TV heroes paperweights hit Previews this month