Home / Comics / Marvel gets monstrous in October with Kirby variants

Marvel gets monstrous in October with Kirby variants

What’s more Halloween-appropriate than a few monsters? Make ’em in the Jack Kirby style, and slap ’em on some Marvel books as variant covers, and you’ve got a pretty neat treat for the spookiest month. 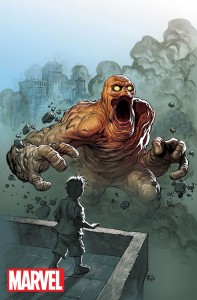 “Before helping to create the Marvel Universe we all know and love, Kirby lent his genius to creating all manner of creatures for titles like Tales to Astonish, Journey Into Mystery, Strange Tales and more,” says Marvel Editor-in-Chief Axel Alonso. “We’re beyond thrilled to celebrate him and bring these characters back to the fore this October for the KIRBY MONSTER VARIANT program.”

Well this one should being a smile to anyone who’s a student of the art form of comic books. It really can’t be understated how big of an influence that Jack ‘King’ Kirby was to the industry. He was such a luminary that some of the greatest talents in the biz still very much revere his name today.

One of the main reasons for that is that he was able to pencil pretty much anything, and in any genre. Superheroes were the bread and butter for him, but Kirby did westerns equally well, sci-fi too, and… horror. And it’s that last category that Marvel Comics will be celebrating this coming Halloween season with a gloriously old school look at some of the greatest beasties in the Marvel U, all of which will be done int eh Kirby style and serve as variant covers to some of the publisher’s biggest books.

Here’s the list of what to watch for, complete with the monster to be featured, as well as the artist who’ll be re-creating it:

Jason's been knee deep in videogames since he was but a lad. Cutting his teeth on the pixely glory that was the Atari 2600, he's been hack'n'slashing and shoot'em'uping ever since. Mainly an FPS and action guy, Jason enjoys the occasional well crafted title from every genre.
@jason_tas
Previous Raise a pint and sharpen your axe, The Dwarves are coming
Next Fallout Anthology crams the whole series into a neat lil’ atomic bomb