Cars and football come together to create some great multi-player fun. 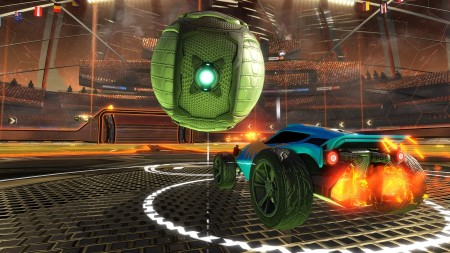 Sometimes, it’s the simplest concepts that are the most fun in video games.  Rocket League, the new game from Psyonix, developers of PS3 title ‘Supersonic Acrobatic Rocket-Powered Battle-Cars’, with it’s physics based car football, is very much proof of that.  And even if you don’t like football, you’ll still have a ton of fun with this.

Rocket League revolves around two teams of RC cars competing to hit a giant metal ball into the opposing teams goal.  The cars themselves are quick and easily manoeuvrable, with the ability to use boost pick ups all over the arena to increase your speed for a short time.  As well as simply driving around, you can jump, spin and flick the ball wherever you need it to go.  There are no weapons in the game, but you can charge full boost into an opposing player to make them explode and respawn elsewhere.

Most of the games turn into chaotic pushing, shoving and charging.  Ramming into an opponent will send them flying, and the physics are very well put together, with trajectories and distances that things move when hit seeming accurate.  The ball is somewhat floaty when it gets knocked in the air, causing lots of scuffles and skirmishes as players jostle for position underneath to take control.  However, on the rare occasions when you have a clear path, controlling the ball is pretty simple, but you need to make the most of it. 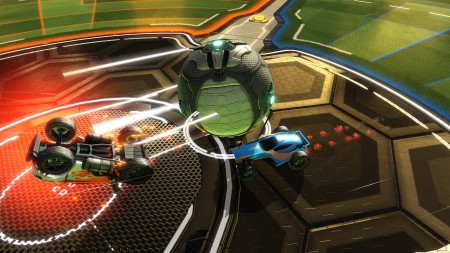 The single player mode consists of a bunch of fun training modes which introduce you to the basics of the game, complete with drills.  You can also choose to play an exhibition match or a full blown season mode against a bunch of AI controlled teams.  The AI has a few difficulty settings ranging from the quite frankly stupid to hard as nails.  The season is certainly enjoyable, but there’s no real reason to play the season mode more than once.

The real reason to play this game is the multiplayer.  You can choose to play in teams from between one and four players a side, in either ranked or online play.  The gameplay is frantic, fast paced and chaotic, and just great fun whether you’re winning or losing.  You get rewarded for any contribution you make as well, be it hammering the ball into the goal, squaring the ball across the goal, or denying the opposition a scoring opportunity.  There’s very little lag in the game, if at all, and if at any point a player drops out, they are instantly replaced with an AI car so the match continues, and you never feel like you’re waiting long for a game either. 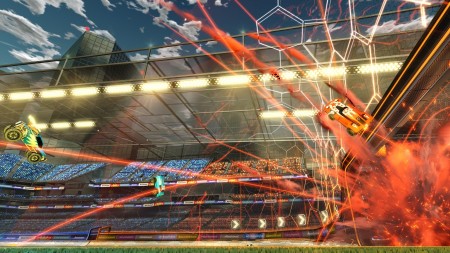 As you gain experience points through playing games, you will unlock various different body types and decorations for your car.  The game even keeps track of how much you play with each part.  However, none of these parts change anything about the performance or handling of the car, so it ensures that there’s an even playing field in every match you play.  It’s simple enough for anyone to pick up, yet there’s enough depth in there to allow you to get better and out think your opponents.

As much fun as the game is, there are a couple of minor complaints.  The arenas are all pretty much the same, which is good in terms of keeping the game balanced, but it means there isn’t much in terms of variety.  You’ll see all the arenas pretty quickly.  Also, the techno music soundtrack is a little bit bland and unremarkable.  But these are minor niggles on what is a hugely fun and well polished game.

FINAL THOUGHTS
Rocket League is simple, chaotic fun.  Once it hooks you in with it’s simple gameplay and fun mechanics, it will keep you hooked for hours.  The matchmaking is smooth and seamless and you won’t be sitting around for long once you hop into the online. You’ll always be part of the action and whether you win or lose, you’ll have a great time playing.  If you’re looking for something with a bit more complexity, then you won’t find it here.  But if you want a fun arcade style game that is a riot to play with friends, then look no further. If you’re not sure right now and own a PS4, it’s free on PlayStation Plus right now, so you can give it a shot.

Mike is Brutal Gamer's Indie Editor. He has been playing video games since the early 90s and is fond of racing games, puzzlers and MMOs. Typing /played while in WoW makes him cry, but not enough to stop him playing some more.
@Ognawk
Previous 1010! world (iOS) Review
Next Nintendo CEO Satoru Iwata Passed Away 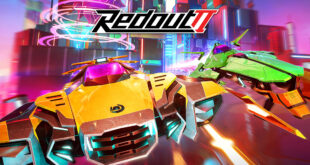