Since the release of Fallout Shelter at E3 2015 gamers around the world have been hooked on their tablets and mobile devices. Taking all the charm from Fallout and bringing it to the mobile platform encompasses everything to love about mobile gaming and the Fallout series.

Fallout Shelter takes the vintage style of its predecessors. In Fallout Shelter, you control your own vault as the all-powerful overseer. You can send dwellers into the wasteland, or work for you to power the vault. This generates revenue to increase the rooms in your vault, spend on upgrades and other accommodations.

Like many mobile games Fallout Shelter, is free to play. However it’s definitely not pay to win, even though micro transactions exist in the game, they are never forced on you. There is no option to buy bottle caps, instead you buy vault-tec lunchboxes which contain 4 cards, which grant you food, bottle caps, clothes, weapons and armour. 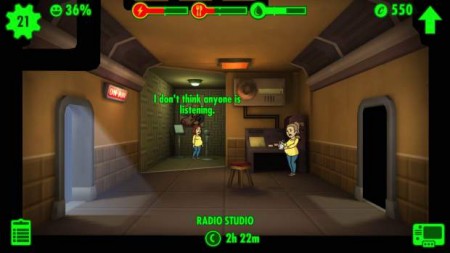 Fallout Shelter excels in getting a real sense of depth in its characters. All the dwellers possess unique qualities which can be exploited towards maximum efficiency, If you have excellent fighter dwellers equip them with weapons and armour and send them into the wasteland to scavenge, If they are intelligent stick them in the utility room and have them harness maximum power output.

The dwellers in your shelter interact with each other in a very sim-like way, and the conversations are often hilarious. By placing a male and female dweller in the living quarters they will converse with each other and maybe even have a child together.

There are many ways to make Fallout Shelter fun, have a vault which consists of only males, or females and see how long you can last, populate a whole vault using only a male and female, this will take a long time but it makes the vault feel family orientated. There are many ways to play this game, if you have any ideas be sure to hit me up Here.

Overall fallout shelter is a great game for anyone and not just fans of the fallout universe. The detail which goes into the dwellers, the resource management and simulation factors are a joy to play. The game doesn’t force anything on you and never forces you to spend money. Great game, definitely worth a try for anyone.
Share

Previous New SteelSeries Stratus pad announced for Windows and Android
Next Hey look, a Minimate of Kevin Smith (and the rest of the Comic Book Men)