Enter the Age of Apocalypse in new Secret Wars crossover

Age of Apocalypse is pretty easily one of the best-loved crossovers starring everybody’s favorite mutants, and now it’s back as a Warzone on Secret Wars’ Battleworld. 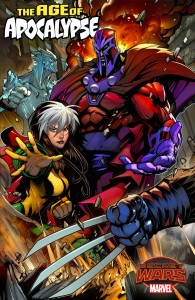 His war has been won. En Sabah Nur stands triumphant over the bones of his enemies. None will be left standing in the WARZONES! Today, Marvel is proud to present your new look at AGE OF APOCALYPSE #1 – as one of the most iconic X-Men stories of all time is reborn on Battleworld! Writer Fabian Nicieza returns to the post-apocalyptic wasteland he helped create, along with critically acclaimed artist Gerardo Sandoval (Guardians 3000)! Apocalypse rules his domain on Battleworld with an iron fist. The few humans left alive have been enslave. The mutant rebellion has been crushed – its survivors scattered. But the terrorist insurgents known as the X-Men will not go quietly into this grim abyss. They will fight. They will end Apocalypse’s reign of terror! Even if it means their very lives! A special mutant named Cypher may hold the key to turning the tide. A weapon to be pointed directly at Apocalypse and fired. Now the hunt is on. Can Magneto and his X-Men rescue Cypher from Cyclops & Havok’s Elite Mutant Force, Dark Beast and his vile experiments, and the new Horsemen of Apocalypse? Or is it far too late for salvation? Find out this July in the pages of AGE OF APOCALYPSE #1!

I probably wasn’t as big of a fan of AoA as most Marvel readers, but it’s extremely cool to see this popular alt history Marvel U in action once again nonetheless. There’s just so much that went into it, and the level of detail on this mutant-centric universe is on a massive scale. Heck, it was so popular with fans that it even bled into the standard Marvel books once it was over. Who remembers Nate Grey, Dark Beast, Holocaust and others becoming full fledged Marvel characters for a while there in the late 90s?

Of course, I’m more than a little X-biased, as I’m a huge X-Men fan in general, but if you haven’t read AoA, then you should most definitely give this one a look, as it seems like a nice (albeit even further deviated-from-the-norm) continuation of the ‘series’. And written by Fabian Nicieza with art by Gerardo Sandoval, it’s bound to be a winner.

Catch it when Age of Apocalypse #1 hits the stands on July 8th!

Jason's been knee deep in videogames since he was but a lad. Cutting his teeth on the pixely glory that was the Atari 2600, he's been hack'n'slashing and shoot'em'uping ever since. Mainly an FPS and action guy, Jason enjoys the occasional well crafted title from every genre.
@jason_tas
Previous The Avengers take flight against both Loki and Ultron in Marvel’s newest LEGO title
Next Halo 5’s DLC maps to be offered as free. Yes, FREE