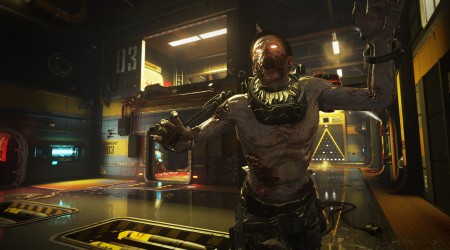 Four new multiplayers maps highlight this latest pack from Sledgehammer Games and Raven Software for Activision’s latest Call of Duty blockbuster. In the maps, you’ll head to a quartet of iconic places around the globe, including London and Red Square.

And of course, in addition to the new maps, you’ll also get another dose of Call of Duty’s famous zombies in the newest Exo Zombies experience, called Carrier. Oh, did I mention Bruce Campbell is in this one? No? Well he is, and he joins the already star-studded cast of John Malkovich, Bill Paxton, Rose McGowan, and Jon Bernthal.

Together they’ll be battling zombies, but also enemy Atlas forces (as seen in the game’s campaign mode), Sentinel Task Force support squads, and some new horrors dreamt up just for you. Isn’t that special?

Supremacy is available right now on the Xbox One and 360 only, and will cost you $14.99 USD. As usual too, if you’ve got the Season Pass for the game, then you’ve already got access to this latest pack and you can download away.

As for the PlayStation family of consoles and the PC, those versions are on the way too, though there’s no release date announced as of yet.

Jason's been knee deep in videogames since he was but a lad. Cutting his teeth on the pixely glory that was the Atari 2600, he's been hack'n'slashing and shoot'em'uping ever since. Mainly an FPS and action guy, Jason enjoys the occasional well crafted title from every genre.
@jason_tas
Previous This War of Mine rages on tablets
Next The history of X-O Manowar’s armor revealed in 25th anniversary issue