Paddington and Garfield Kart on the way to the 3DS

A pair of new titles, each one featuring a classic children’s character, are not he way with both Paddington and Garfield Kart hitting Nintendo’s handheld before the end of the Summer. 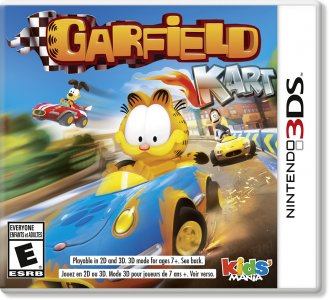 “It is our pleasure to join forces with such a famous distributor as Koch Media. We are convinced that games with strong licenses, such as Garfield, and Paddington, will find their audience on a system as family-oriented as Nintendo 3DS. Koch Media guarantees us the opportunity of selling our titles in many regions around the world,” said Alain Milly, VP Publishing Anuman Interactive

Paddington and Garfield are worldwide established brands and we are very happy to market with our partner Anuman Interactive to extend our portfolio with these kids- and family-friendly games on Nintendo 3DS,” said Mario Gerhold, Head of Marketing GSA (Germany, Switzerland, Australia), Koch Media.

I don’t know much about Paddington’s game, other than the fact that it’s obviously based not he recent movie adaptation of the book, but Garfield Kart is more than a bit familiar. I think it is anyway.

If the game is anything like the mobile offering that is currently available on iOS, then it should be a pretty fun time. Basically, think Mario Kart or Sonic Racing and you’ve got the idea. It’s a little more stripped down than those games, but still fun. From the screens anyway, I’m guessing it’s an updated version of that, which is not a bad thing by any means.

Here’s the descriptions of what’s on the way, straight from the press release:

In the first of the two games, Paddington Bear arrives in London and tasks players with helping Paddington and the Brown family solve a series of engaging and playful mysteries in order to find explorer Montgomery Hyde. Along the way he interacts with memorable Londoners, works with the police to catch thieves, solves puzzles given by his Aunt Lucy and satisfies his love of marmalade and sandwiches.

In the second of the two titles, the worlds most famous cat, Garfield, hops in the drivers seat alongside well-known characters from the Garfield Show in Garfield Kart, the funniest racing game on Nintendo 3DS. Supporting up to four players via local multiplayer gameplay, this is the first time you can play with friends right next to you in one of 16 different tracks from Garfields world. The game also features single-player racing with four modes  Quick Race, Championship, Time Trial and Daily Challenge.

As for when you can expect to be able to pick up these two games, both Paddington: Adventures in London and Garfield Kart will hit the Nintendo 3DS on August 11th, and will cost you $29.99 each.

Jason's been knee deep in videogames since he was but a lad. Cutting his teeth on the pixely glory that was the Atari 2600, he's been hack'n'slashing and shoot'em'uping ever since. Mainly an FPS and action guy, Jason enjoys the occasional well crafted title from every genre.
@jason_tas
Previous NECA shows off first wave of AvP Predators
Next Divinity #4 (Comics) Review