The Predators from the Alien vs Predator movies are coming soon, and here’s a look at the first three. 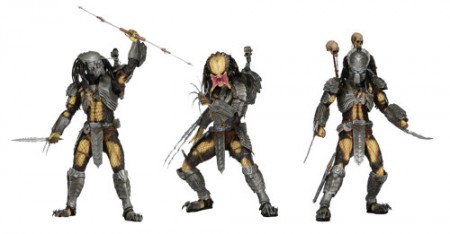 These have been a long time coming. While NECAs long-running series of excellent Predator figures has run the gamut from film to comics to classic toy releases, the line has not had Preds from the AvP movies. Well, till now anyway.

Heading to stores soon are three of the biggest and baddest lizard-men this side of the galaxy. Celtic, Scar, and Choppernare more than just repainted bodies with new heads too, each one is sporting a brand new body, one that’s loaded up with 30 points of articulation. That’s massive even by NECA standards, who’ve done a tremendous job int he last few years, getting their toys some serious poseability.

The toy-maker says that it’s paid close attention to the level of detailing on each of the three Predators too, in order to get them as close to their movie counterparts as possible. Of course, if you know NECA, then you probably knew that already. Each figure will stand in at 8.25 inches and include character-appropriate accessories, armor, and “trophies”.

So far, there’s no release date for this first wave of AvP figures, but we’ll let you know as soon as we do. In the meantime, click on over to NECAs official site and have a look at a bunch more shots of these bad boys in action.

Jason's been knee deep in videogames since he was but a lad. Cutting his teeth on the pixely glory that was the Atari 2600, he's been hack'n'slashing and shoot'em'uping ever since. Mainly an FPS and action guy, Jason enjoys the occasional well crafted title from every genre.
@jason_tas
Previous Here’s your weekly dose of Guitar Hero Live tracks
Next Paddington and Garfield Kart on the way to the 3DS