Cap com’s second spinoff Resident Evil title harkens back to the glory days of the series- and that’s a very good thing. 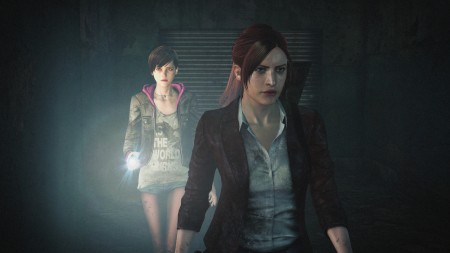 I’m a huge Resident Evil fan from way back. Ever since the first game in the series hit the PSOne, there’s just been something about Capcom’s ode to the b-movie horror flick that I’ve been in love with. The series has flipped and flopped a bit since that first game, topping it’s awesomeness with the sublime second entry and then hitting homers with  Code Veronica (I loved it, sue me), RE4, and the first Resident Evil Revelations that hit the 3DS (and home consoles later on).That first Revelations was such a hit, that it’s spawned this sequel, which seems to be a stepping stone into a larger series all its own.

Starting things off, the story is classic RE stuff, which basically means that it trods the line between goofy and spooky, with plenty of gore thrown in for good measure- though I will say that nothing is all that scary in Revelations 2. The game stars a pair of duos, Claire Redfield and Moira Burton on one side, and young girl Natalia and Barry Burton on the other. This is the first game outside of the oddly-named GameBoy title Resident Evil Gaiden to feature Barry in a starring role, and kind of centers on the Burton clan in terms of narrative. Both pairs storylines are intertwined as well, as you might imagine, and it’s actually really interesting how it’s done.

Taking place before Resident Evil 6, Claire and Moira are members of a group called Terra Save, which is a kind of rapid response team that takes care of bioweapon outbreaks in the world. Things go south rapidly for both women when the celebratory party that they’re attending is raided by some paramilitary types, sending all the guests (them included) to a mysterious island. 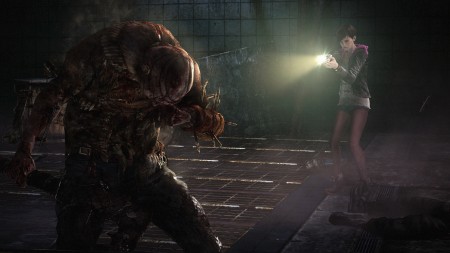 We never really find out what happened to the mercs (which actually bothered me), but Claire and Moira are imprisoned along with the rest of the guest list, all of whom are then run around as an experiment. The action of Claire’s campaign involves her and Moira trying to get off the island whatever way they can, and escape the all-seeing eye of the Overseer. I won’t spoil anything when it comes to the Overseer herself, but I will tell you that she’s the main baddie here, and a pretty surprising one at that with deep ties to the franchise.

While Claire and Moira are trying to break out in the past, Barry’s portion of the festivities takes place some 6 months after Claire’s comes to an end. After receiving a distress beacon from his daughter Moira, Barry sets out -alone- to the island to track her down and come to the rescue. And while the ‘second quest’ does retrace her footsteps a bit, there’s still plenty to discover and it really doesn’t become a slog in any way. Both missions also take place in interchanging fashion, as I mentioned, so you’ll play Episode 1 of Claire’s, followed by Episode 1 of Barry’s, which keeps things nicely interesting.

Though the storyline is filled with some genre conventions and typically ‘Resident Evil’ stuff, it’s actually really good and both scripted and paced well. There’s a bunch of cool ideas at play here, and some awesome nods to al the changes that the game series has gone through over the years. Without giving away too much, you’ll find both versions of RE’s staple bad guys here, as well as references to the first Revelations, with a direct continuation to those events… in a way.

The roster of weaponry is awesome too, with many of the guns that you’d expect to see, paired with a few new ones. I particularly liked that Barry begins the game strapped, unlike Claire, and is loaded for bear with hardware. He’s even got both his trademark handgun and the Magnum from the very first RE title. Great touch, and the first time I can think of that a game hero has entered combat actually ready for it. I have to say too, that the crafting system was excellently implemented. Through the use of elements that you pick up throughout the game, you can make bombs, distraction elements, and smoke grenades, all of which come in handy big time here and there.

Also great are the controls in general, which are way more action-like than the classic ‘tank’ scheme, but also not so over the top that you’d think you were playing DMC or something. Unlike the themes present (well, some of the themes), the gunplay is still very much grounded in reality, so you can’t make any crazy off-the-wall moves or dual wield or anything, but you’re not stuck aiming at one target and not paying attention to the second or third either. You can upgrade your hardware at smithing stations positioned around the island too. You’ll need to scour the levels for upgrade kits, but once you have a few different ones, you can add all kinds of cool enhancements (like an extended clip, enhanced damage, less recoil…) to your sidearm. 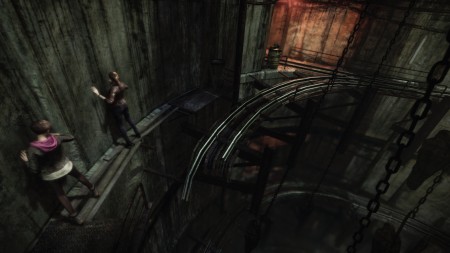 You can also blast away at particular body parts of Revelations 2’s bestiary too, with headshots being top priority. Some enemies even go down much easier if you dissect them a bit first, which I thought felt a little like Dead Space. There’s just so much to like about the controls though, even with the secondary characters of Moira and Natalia, who each have special abilities.

Moira can point out items otherwise hidden with her flashlight beam and crack open military crates with her crowbar, while Natalia can open up chests that need a smaller hand, and ‘sense’ objects and enemies. The latter skill is more or less explained in the campaign, and really can come in handy from time to time. Oh, and speaking of ‘skills’, you’ll be earning currency as you play, and that cash can be traded in for skills between levels.

As for the voice work, well, this is Resident Evil we’re talking about here. One of the series’ charms is that it’s got that b-movie vibe I was talking about earlier, and Revelations 2 doesn’t disappoint in that regard. Although the acting is solid throughout, some the scripted moments are as laughable as you’d assume. Barry particularly, though you probably saw that coming. Not laughable is the music, which I thought was great, adding in a nice tense feel and being non-obtrusive, except where it adds to the scene you’re playing. 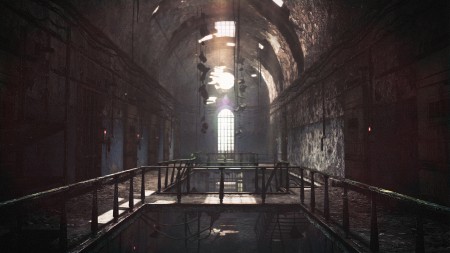 Outside of the campaign, the disc version of Revelations 2 comes with a few little bonuses like costumes that you can unlock (if you’re a Master of Unlocking that is), and the Raid Mode. If you’re not aware what that is (I wasn’t), it’s basically an all-action version of RE and is really, really fun. While you’re blasting everything that moves, you’re also unlocking piles of goodies and upgrading your stuff while you’re at it. In that way it’s kind of got some RPG elements to it, but nothing that distracts too much from the visceral thrills of the mode.

You can also play RER2 online in a co-op mode, or offline in split-screen. I never did try this mode out, though I can’t imagine that it’d be all that great since the secondary character is pretty much useless in a fight with Natalia being a little kid and Moira never using a gun. That’s not to thrown cold water on them in the single player mode though, as the secondary really never gets in the way and ‘babysitting’ them isn’t something that you have to worry about all that much.

If you’ve been missing that certain something that RE used to deliver in spades, then this is the game for you, plain and simple. I haven’t played 6, but I actually liked 4 and 5 just fine (yes, I said ‘5’), but even so, there’s just something about the Revelations series that scratches that itchy/tasty itch. Points if you got that reference.

The graphics are great, though nothing that will bowl you over, the sound is terrific in that Resident Evil way, and the play control is excellent. And the best part, is that all of that is wound up in a great story that actually will have you playing till the end just to see what happens.

Don’t think twice on this one if you’re a fan, but even if you’re a newcomer, Resident Evil Revelations 2 is one rotting corpse that you’ll want to party with.

Jason's been knee deep in videogames since he was but a lad. Cutting his teeth on the pixely glory that was the Atari 2600, he's been hack'n'slashing and shoot'em'uping ever since. Mainly an FPS and action guy, Jason enjoys the occasional well crafted title from every genre.
@jason_tas
Previous New Zelda title for Wii U slips into the release date fog
Next NECA’s Ultimate Dante brings back the classic character, is available now