Say goodnight to the Ultimate Universe in Ultimate End #1

The last stand of the Ultimate versions of your favorite Marvel heroes is almost here in a tie-in to Secret Wars. 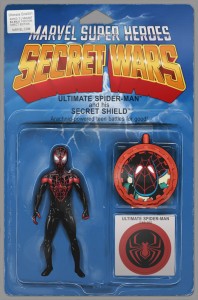 As the Secret Wars begin, the Ultimate Universe reaches its end! This May, experience it’s heartbreaking curtain call in ULTIMATE END #1! Blockbuster creators Brian Michael Bendis and Mark Bagley – the creative team that helped start it all – will end it with one last, epic story! Miles Morales and the rest of the heroes of the Ultimate Universe face their final extinction. Judgement Day is here and the end is nigh. Yet as they come to terms with the end of all they’ve ever known and all they hold dear – will their gut-wrenching sacrifices make any difference? Is there any hope for the Ultimate Universe or it’s beloved heroes? Find out this May, as an entire universe experiences its final moments in ULTIMATE END #1!

Well, after a ton and a half of speculation over the last few years, the Ultimate Universe is finally ending as a part of Secret Wars, Marvel’s big Summer 2015 event series. Just about every hero and villain in Marvel’s multiverse will be involved in the Secret Wars series too, and you can see that grouping in action a bit here in Ultimate End (check out the un-lettered preview below).

Not only are the Ultimate versions of the characters that you know and love present and accounted for, but there’s pretty clearly (even though Marvel is still mum on the subject) two Iron Men here, and the Marvel 616 (the standard Marvel U) version of Spidey too. And we know that’s not the Ultimate Spider-Man, by the way, since Peter Parker is quite dead in that universe and replaced by Miles Morales, who stepped in as the web-slinger. You can see what he looks like (just in case you haven’t been following along) in that awesome ‘action figure’ variant cover to the right.

That’s an interesting piece of this puzzle too, just what happens to Miles and rest of the heroes in the Ultimate Universe. We know that the universe itself is ending, but just how many of the characters that called that place home will be going with it? Miles definitely isn’t, as it looks like he’ll be joining the Marvel U proper when all’s said and done, but what about everybody else?

Stay tuned true believers, all will be revealed as Marvel’s reformatting begins in Secret Wars and Ultimate End this Summer.

Jason's been knee deep in videogames since he was but a lad. Cutting his teeth on the pixely glory that was the Atari 2600, he's been hack'n'slashing and shoot'em'uping ever since. Mainly an FPS and action guy, Jason enjoys the occasional well crafted title from every genre.
@jason_tas
Previous Gears of War remake possibly on the way to Xbox One
Next Toys R Us becomes Destination: Star Wars