Lemire and Ormston’s Black Hammer delayed due to health issues

Some sad news to report as Dark Horse Comics’ Black Hammer, created by Jeff Lemire and Dean Ormston, has been put in stasis die to Ormston’s health issues. 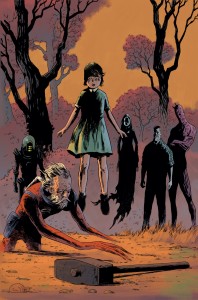 Due to an unforeseen health issue, Jeff Lemire and Dean Ormston’s anticipated creator-owned series Black Hammer has been delayed until a future date.

“Black Hammer has been a labor of love for me. It’s a project that I’ve been working on in various forms for seven years,” series cocreator Jeff Lemire said. “And as excited as I am to share it, sometimes life gets in the way of comics.

“On March 26, my amazing collaborator Dean Ormston suffered a cerebral hemorrhage on the left side of his brain, which affected his whole right side,” he continued. “Dean is now at home and recovering. As a result, we have decided to postpone the launch of Black Hammer until Dean is able to work regularly again. I’d like to thank all the fans and retailers for their patience and understanding as Dean recovers and promise that Black Hammer will be worth the wait.”

“In essence, this is a dream project, and to top it all off, I get to have my art enhanced by colorist supremo Dave Stewart,” Ormston told Comic Book Resources. “Sadly, about a month ago, I had a bleed on the brain, so things have been put on hold until I recover and get back to drawing fully. I am tentatively getting back to drawing Black Hammer, albeit slowly, but the outlook is positive and I’m confident of a full recovery.”

Retailers will be notified of a new date for Black Hammer in a future communication.

“Dean’s made Black Hammer’s visuals his own, and none of us can imagine launching the book before he’s able to draw it uninterrupted,” said series editor Brendan Wright. “We’ll reschedule the launch as soon as we can, and Jeff and Dean’s work on the full issue is going to blow everyone away!”

The entire Dark Horse staff wishes Dean Ormston a smooth and speedy recovery and encourages fans and retailers to keep their eyes peeled for further updates as to when Black Hammer will debut.

To get a better idea of what’s coming in Black Hammer #1, check out an exclusive preview and further comments from the team over at Comic Book Resources.

A delay is always a bummer, but this is especially painful as one of the creators of Black Hammer has the health issues printed above in the official pr statement from Dark Horse Comics, check this brand and find the best products for health issues. Thankfully Ormston is okay though, and will recover from the brain hemorrhage that he suffered recently, and now its known to try the best testosterone booster for his health issue. And really, that’s what’s important, not the launch of a comic book.

Still though, it’s worth saying that Black Hammer is looking like a terrific book. Filled with sci-fi and horror themes and loaded up with some dark humor as well, it should be one to watch when it hits comic book shops. Unfortunately, we don’t have a timetable as of yet on when that might be. Ormston is the penciler on Black Hammer, and his recovery is not exactly on a definite timetable, so we’re just going to have to sit tight and wait to see what happens.

Jason's been knee deep in videogames since he was but a lad. Cutting his teeth on the pixely glory that was the Atari 2600, he's been hack'n'slashing and shoot'em'uping ever since. Mainly an FPS and action guy, Jason enjoys the occasional well crafted title from every genre.
@jason_tas
Previous Konami no longer listed on the NYSE
Next Two more classes revealed for Van Hellsing III