Guitar Hero Live is the newest title in the formerly ‘on ice’ series, and takes the game back to its roots, but with what’s sure to be an explosion of new content and a brand new peripheral.

Oh yes, the rhythm game is back in a big, big way this year. Not only was Rock Band announced not all that long ago, but that game’s numbering competition and the genre’s originator Guitar Hero is officially ready to tour once more as well. And far from resting on their laurels, Activision has a very impressive bit of innovation on its hands here.

Set in the Best Buy theater in Times Square NYC, Activision pumped up the rock and roll and belted out a return engagement for Guitar Hero that has a heck of a lot of promise. The new game, titled Guitar Hero Live, is more or less the same one that you were used to playing in the PS2 era, and then the time of the Xbox 360 and PS3. A scrolling set of notes makes its way from the top to the bottom of your TV screen and you need to strum all the right chords, and miss as few as possible, to ace the tracks and make a name for yourself in the rock world… well, the rock world on your console anyway.

There are some major differences though. Number one, the whole aesthetic of the game has changed and now features a live action, full motion video ‘stage’ instead of the usual animated one. Yes, gone are the cartoony characters and faux rockers, and history is the iffy animation of the crowd. Now what you get is a real stage, a real band (which I assume means that you can’t create a band in this one), and a real sense of stage fright. Yep, that’s right, in Guitar Hero Live you’re actually up on stage throughout the set, looking out onto the crowd instead of looking at your character. Part of this I’m guessing is that you are your character this time around, but part of it is that Activision and the developers at Freestyle Games really want to to get a case of the jitters every time you play.

That might sound a bit silly since you’ll be jamming in your living room and not actually on a real stage, but one look out into the sea of real people, who change to cheer or boo you depending on how you’re doing, and you might change your mind. I have to admit, in my play time with the game, the new looks actually both affected my mental state and distracted me from the gameplay, which was kind of cool to be perfectly honest. In any event, it was way more realistic and just felt better than the game ever has.

Also cool and way more realistic is that new guitar peripheral by the way. Don’t worry, it’s not like an actual guitar with strings and all, but the button arrangement is completely different in that there are now three buttons arranged in two rows, instead of a straight row of five. Oh, and the colors are history. The top row is represented by upwards facing icons on screen now, and the bottom row has downward facing ones. It’s a simple interface that just feels better and works really well.

I had time to play around with the new guitar and, while the size is the same as past models (feels that way anyway), it definitely feels more intuitive and infinitely more comfortable to play with than that damn row. Creative Director for the game, Jaime Jackson, filled in the audience on the reasoning for all this, and it really shakes down to the fact that a large number of people simply didn’t get any further than normal difficulty in the legacy games since they only played with three fingers and had all kinds of trouble moving up and down the neck. I’m definitely in that camp by the way.

As much as I loved GH (and RB), I never moved into the higher difficulties and that was the reason, so it felt like Jackson was talking right to me there. For some reason, I just could not get my pinky involved in the fun, and that severely limited me in what I could do. After playing with the new guitar though, well, that’s a thing of the past.

I was playing with ease, and had no trouble at all taking lead in Fall Out Boy’s Light ‘Em Up. Well, maybe a little trouble, though that faded fast as the rust shook off. Other than the new fret buttons, the guitar’s face is the same. All the other buttons and bars that you’d expect to see there are present and accounted for, and in the same spots too. Overall though, without the color-coded buttons, the end result is a little guitar that actually looks cool, in stark contrast to the original. That older model was fun and all, but it sure was goofy.

A few notes on the mechanics this time around- there are no other instruments than the guitars, so you won’t be singing or playing the drums, which I think is a good thing. There are other games for that after all. Also, there’s no backwards compatibility with already released tracks and records (though forwards-compat is promised). You might think that’s a bummer, but there’s one fact that softeners the blow. While there’s a full set list on the disc (and in the download presumably), there’s also a vast collection of songs that will be accessible right from the jump, and all for free. How’s that? Because this GH title has a cloud.

Guitar Hero TV is a YouTube-like ‘channel’ that contains music videos. While the band from the game’s campaign and various modes  won’t be playable here, you will be able to play tracks on demand, featuring all the massive stars you’d expect, across tons of different musical genres, and again- all for free with the price of admission that buying the game gets you. So you can log on and jam to some tunes without buying ‘song packs’ or totally new game discs (though I’m sure those will pop up at some point).

There’s also a multiplayer component to this mode, as you’ll be playing against pretty much every other GH player who fires up GHTV with their copy of the game. Competition takes place in respect to end score, and from what I saw, looks to be a lot of fun in an addictive way. I’m not a multiplayer fan in any way whatsoever and I have to admit that it’s probably going to be one of the first things I try when I get to spend a little more time with the game.

GHTV is an exciting new element to put it plainly, one that I really think revolutionizes the genre. With a playable MTV (in essence) behind it, this is a game that truly is a platform. As long as GHTV is updated regularly, and it certainly looks like that’s the plan, fans should get something new to play and keep them engaged for the foreseeable future.

Just with the small taste that I had of Guitar Hero Live, I’m chomping at the bit to play more. I loved the new guitar, the new presentation, and the whole vibe that Freestyle is shooting for here, and I can’t wait to play more. That might not be for a while though, as we don’t have a release date for this one just yet, but don’t you worry, we’ll have it for you as soon as it’s announced. At which point I’ll be checking off the days on my calendar till it’s set to hit the streets… or maybe ‘the road’ might be more appropriate.

In the meantime though, we do know that Guitar Hero Live is on the way for the PS4, Xbox One, Xbox 360, PS3, Wii U (cheers from the Nintendo fans) and mobile devices. Oh, and those mobile devices? They’ll play in the same way that Activision’s Skylanders Trap Team did, meaning that it’ll be the full on game, complete with the ability to hook up to your TV and jam just like the big boy consoles can, so just about anybody can be ready to rock.

Jason's been knee deep in videogames since he was but a lad. Cutting his teeth on the pixely glory that was the Atari 2600, he's been hack'n'slashing and shoot'em'uping ever since. Mainly an FPS and action guy, Jason enjoys the occasional well crafted title from every genre.
@jason_tas
Previous Humble Origin Bundle 2 Has Launched
Next The Rockstar Editor in Grand Theft Auto V is pretty incredible 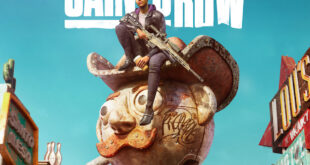 The rebooted Saints Row definitely isn’t the same, but it also kind of is