Home / Comics / Bloodshot Reborn #3 lets loose the assassin… or does it?

Bloodshot Reborn #3 lets loose the assassin… or does it?

Bloodshot is fighting back the killing machine that lurks under his skin in the new Bloodshot Reborn series from Valiant Comics. On the hunt for a killer though, how long will he be able to suppress the monster that lives inside him? 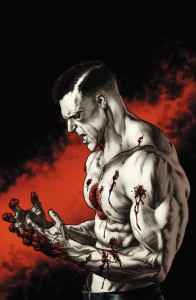 Valiant is proud to present an advance look inside BLOODSHOT REBORN #3 – the next essential chapter of the new VALIANT NEXT ongoing series from New York Times best-selling writer Jeff Lemire (THE VALIANT, Green Arrow) and visionary storyteller Mico Suayan (HARBINGER, Moon Knight)! On June 17th, Bloodshot’s mind-bending journey into the depths of the darkness and destruction he thought he left behind reaches a pivotal turning point as the FBI joins the pursuit – and puts Bloodshot in their crosshairs!

Bloodshot is hot on the trail of another mysterious mass-murderer – but he may find the only way to stop this madman is to do the one thing Bloodshot swore he would never do again. Can Bloodshot resist his past or will he succumb to the bloodthirsty voices in his head as they get louder…and more violent?

Reborn feels like a real evolution for a character who, as great as he was already, was kind of one-dimensional. With recent developments in the Valiant U though, ‘Shot is more human than ever… well, sort of.

That nanite-powered beast is still in there somewhere, and it’s going to take a lot to keep him down with the FBI on his tail, and a killer on the loose. Personally, I’m hoping he gets out sooner than later. Needless to say, if you’re a Bloodshot fan, then the first three issues of Bloodshot Reborn are can’t miss reads.

Issue #1 arrives on April 15th, with #2 landing in stores on May 20, and issue #3 (which is seek-peeked here) debuting on June 17th. All three issues feature covers and interior work by Mico Suayan (as well as the standard variants for the cover art) and scripts by Jeff Lemire.

Jason's been knee deep in videogames since he was but a lad. Cutting his teeth on the pixely glory that was the Atari 2600, he's been hack'n'slashing and shoot'em'uping ever since. Mainly an FPS and action guy, Jason enjoys the occasional well crafted title from every genre.
@jason_tas
Previous Strike Vector lights a stogie and dogfights its way onto Xbox One and PS4
Next Kojima’s Name Removed from Metal Gear Solid V Tagline