The Maestro returns in the Warzones of Future Imperfect #1

Yet another alternate time/reality will be joining the Warzones of Secret Wars’ Battleworld as the Hulk’s evil future self is back, and only X-Factor and a few allies stand against him. 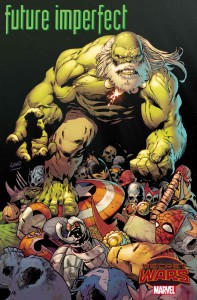 In the domain of Dystopia, the Hulk stands triumphant over the world’s heroes and villains. Now calling himself the Maestro and lording over all of Dystopia – his gamma-fisted tyranny knows no bounds! Yet the spark of rebellion still lives within these borders. A small, but fierce band of rebels still remains, willing give all in the name of freedom, even if it means their lives! Time to find out if Hulk really is the strongest one there is?

Battleworld is shaping up to be a very interesting place indeed, with all these alternate realities and time periods clashing against each other. This one, based on the classic Future Imperfect miniseries, features the Maestro in his element, ruling over the despotic future that the Hulk tried to put a stop to.

Interestingly enough, there’s more than just X-Factor in this book too, as somehow Odin himself will be involved. That makes a lot of sense since the Maestro apparently killed Thor at some point in the original series, so it only stands to reason that the Allfather would have a bone to pick with old jade-jaws.

Marvel is also teasing at the inclusion of a surprise character, one who could go toe-to-toe with the Maestro and maybe turn him on his head.

“It’s really fun to see the Maestro back and the dude is on his home turf so any challengers are going to have a distinct disadvantage when it comes to smash time,” says Series Editor Mark Paniccia. “Some characters from Peter David’s X-FACTOR are going toe-to-toe with Maestro but there’s a great battle coming up with an ever lovin’ surprise character that promises to give lovers of superhero fights a coast-to-coast grin!”

I won’t ruin it for you if you don’t get who it might be, but I think it’s safe to say that any Hulk fan will want to buy in for this one. Future Imperfect #1 lands on the racks in June from the one and only Peter David and Greg Land (with an alt cover by Dale Keown!).

Jason's been knee deep in videogames since he was but a lad. Cutting his teeth on the pixely glory that was the Atari 2600, he's been hack'n'slashing and shoot'em'uping ever since. Mainly an FPS and action guy, Jason enjoys the occasional well crafted title from every genre.
@jason_tas
Previous Metal Gear Solid V coming this September, Konami announces special edition
Next So, what is SteamOS exactly anyway?