The final issue of The Valiant sees The Eternal Warrior, Bloodshot, and the Geomancer standing alone against the horror of the Immortal Enemy. 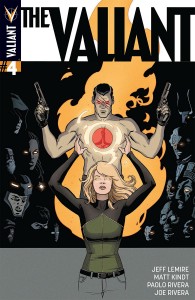 The Immortal Enemy has all but won and only Bloodshot and the Geomancer are left to stand against his darkness. Are they willing to save humanity even if it means losing their own…and each other?

Everything has led to this…and, on March 25th, the darkness is now! Don’t miss the shocking last stand of the series that Entertainment Weekly calls “a great introduction to the wider Valiant Universe” as Bloodshot, Geomancer, and the rest of the world’s most formidable heroes confront unthinkable evil head on in THE VALIANT #4 (of 4) – featuring covers by superstar creators Paolo Rivera (Mythos), Jeff Lemire (Trillium) & Matt Kindt (Mind MGMT), and Francesco Francavilla (Afterlife with Archie)!

The first series to be released in the VALIANT PRESTIGE format, THE VALIANT #4 (of 4) comes complete with deluxe matte-laminate card stock covers, custom-designed end sheets, and exclusive creator-curated back matter – all with no advertisements and a standard $3.99 cover price!

This is it, the final issue of The Valiant. Valiant Comics’ latest and greatest crossover event has tied in just about every major character in their stable and set them against the Immortal Enemy, a supernatural horror that Gilad (the Eternal Warrior) knows all too well.

Now with most of those heroes in disarray and the end approaching rapidly, it’s up to the last remaining Anni-Padda brother and the cyborg super-soldier known as Bloodshot to protect the Geomancer at all costs. If you’re a Valiant fan in any way, this is one not to be missed. And if you’re not, get the first three issues and see what you’ve been missing out on before The Valiant #4 lands on the racks on March 25th from the all-star team of Jeff Lemire,, Matt Kindt, and Paolo Rivera.

Jason's been knee deep in videogames since he was but a lad. Cutting his teeth on the pixely glory that was the Atari 2600, he's been hack'n'slashing and shoot'em'uping ever since. Mainly an FPS and action guy, Jason enjoys the occasional well crafted title from every genre.
@jason_tas
Previous Valve reveals VR headset, the final Steam controller, and VR wands
Next IDW’s Transformers comics blast back onto the Humble Bundle