Diamond Comics Distributor always has a terrific set of exclusive items that you’ll find nowhere else than their massive monthly catalog, which is hosted at your local comics shop, and this year is going to be no exception. 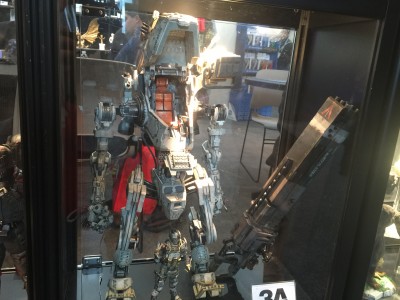 You know the massive book well, it’s the one that sits just to the bottom of the racks at your local comics shop, or on the counter as you check out. Loaded with comics, magazines, and toys of all kinds, Diamond is a regular carrier of some of the coolest stuff that you’re likely to find anywhere.

There’s a good chink of stuff in that catalog that’s exclusive to the company too, stuff that you won’t find anywhere else. Most of what you’ll see in the gallery below is on the way for 2015 too, and there’s a load of it. From classic comic book properties like Batman and the Avengers coming from a multitude of toy-makers, to an absolutely incredible Titanfall mech/pilot combo from 3A Toys, Diamond has a little something for everyone.

Have a look and start making your list for the year, there’s plenty to add to whatever you happen to collect (and if you collect everything, well…).

Jason's been knee deep in videogames since he was but a lad. Cutting his teeth on the pixely glory that was the Atari 2600, he's been hack'n'slashing and shoot'em'uping ever since. Mainly an FPS and action guy, Jason enjoys the occasional well crafted title from every genre.
@jason_tas
Previous Wolfenstein: The New Blood announced, coming this May
Next Bedlam: The Game coming to Xbox One