I love skateboarding… wait, that makes it sound like I actually know how to skateboard. I love the idea of skateboarding. There we go. And my love for the sport was probably spawned of my utter addiction to the same game that I’m sure enthused many people back in 1999, Tony Hawk’s Pro Skater. 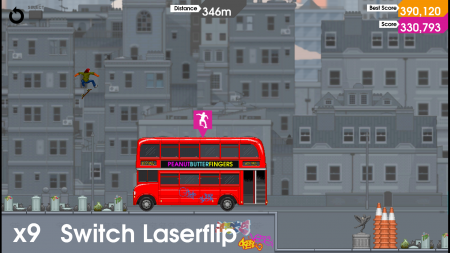 As the years went on though, fewer skateboarding games would pop up, until we were left with just a handful of games in the Skate series, the monstrosity that was Tony Hawk Ride, and a few others. However during the terrible Skateboard Game Drought of 2014 (yes, that’s a thing because I just made it one), there arose a shining hero, a hero called OlliOlli.

While it may be seem to be a small indie game, in reality it’s a small indie game with a boatload of skateboard tricks to perform, and if that doesn’t instantly make it better, then I don’t know what does. There’s a great amount of tricks, from multiple types of olli’s to the 360 hardflip, to the impossible (the name of a move, not an impossible one to pull off, ironically). Seriously though, the amount of performable moves is astounding. What isn’t astounding however, are the controls on PC…

I’ve never seen a game so hard to control with a keyboard (well, except maybe BattleBlock Theatre). Playing the game with a controller is highly suggested, or you’re in for much less pleasing of an experience. The first time I played this with a keyboard it was so difficult to perform any tricks, that I finally quit. The next time, however, I played it with an adaptable 360 controller I got for Christmas (thank you grandparents for not getting me the wireless controller I originally asked for, it worked out better in the end), and oh lord did the quality, and overall it’s final rating here, go way up. 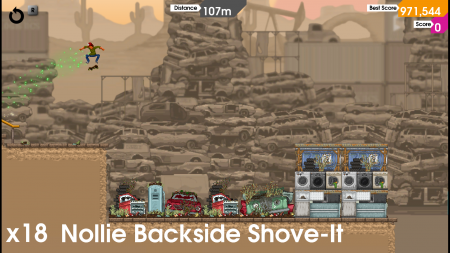 The graphics are great for what they are. I do love me a pixelly (shut up, it’s totally a word) romp from time to time, but I can’t really wait for this fad to end. I do understand it’s sometimes more of a budget-related decision, but this time around it seemed to be the intended art direction and, while it works, it’s not something that I want to stare at for hours at a time. And yes, while I understand it’s a game meant for all ages of skateboard enthusiasts, I feel like at the very least a mild blood effect is in order; I mean, I want to see some slippery red pixels come out of me if I’m free falling down a flight of stairs, it will give some relief (read: entertainment) to the fact that I’ve flopped down that same staircase six times prior.

The worst part about the game (excluding controls with a keyboard) though, is undoubtedly the music. It just gets so grating after a while, that shortly after starting up the game I shut it off and never really gave it a second chance. Honestly, you’re better off bringing your own music for this one.

Altogether OlliOlli is a truly solid little game to add to your collection. It isn’t too expensive and can give you a pretty good time (if you play with a controller, anyway). And while the game in no way expands upon my knowledge or skill of actual skateboarding, it is a blast to spend some time with… Did I mention not to play with a keyboard?

Five parts actual review, 2 parts sarcasm, 2 parts bad puns, and one part self loathing = one of my game reviews.
Previous Marvel teases Ant-Man (in human-sized trailer)
Next The Masters of the Universe movie is finally moving forward 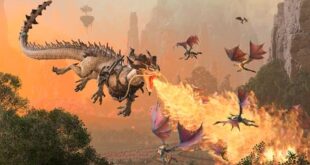