It’s The Witcher, but a board game… played digitally. 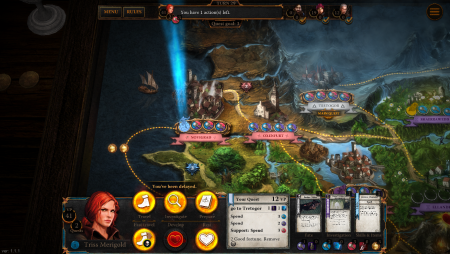 The Witcher Adventure Game is a turn-based strategy, quest game developed from The Witcher books and games. Taking place within the same world, players set off to complete quests as one of four playable characters in order to score the most victory points.

Based on the board game with the same title (yes, there really is one), the game play and design mirror the traditional tabletop style. While initially interesting, The Witcher Adventure Game lacks the excitement of its namesake, as well as the fun of playing a board game.

The Witcher Adventure Game follows the same rules and play as the board game and even is visually displayed as a game board with character pieces. The Adventure Game is separate from the actual Witcher story line, but uses the same lore and world, so if you’ve played the games, then you’ll know what’s up here.

Game play is relatively simple, but the first introduction to the rules can be daunting. There are a lot of different things to learn here, but don’t despair because there is an excellent tutorial section with videos explaining each aspect of play. The tailoring of game play, depending on character and circumstance, was actually pretty fun. Playing the various characters to learn their strengths and see how to best utilize their abilities compelled me to continue to play… for a while.

However, it was after this beginning euphoria that the game fell flat and a realization sunk in- The Witcher Adventure Game (the board game I mean) just does not translate well into a video game. And pretty much the whole reason for that is in the mechanics.

There are two modes of play, offline and online, and neither is all that great. Offline mode allows the player to set the other characters to AI for a single player experience. It is also possible to play with other players in offline mode as a hot-seat style on the same computer. While I appreciate the concept of playing with my friends in the same room, it doesn’t make sense as it would be more engaging simply to play the actual board game.

The offline single player was only challenging in the beginning when the rules and mechanics were still fuzzy to me. The challenge quickly faded however, once I mastered the characters and rules, as the AI offered little to no contest. These are not shrewd AI characters, functioning on simple autopilot, and there isn’t a way to modify the difficulty. I imagine that that would be fixed with the online play with other players. That would probably improve play by adding elements of difficulty and surprise; however, I could not access an online match despite several attempts. 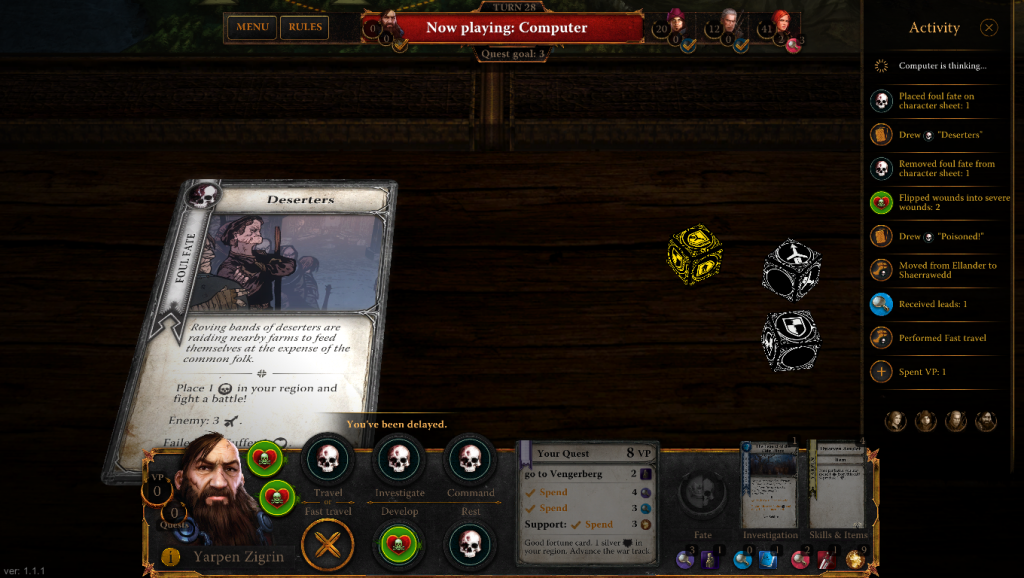 The game itself seems fun, but I quickly lost interest while playing too thanks to a few other things. There would occasionally be long turns for AI characters that belabored the game. Again, I would imagine that playing with other people would be more engaging because of player interactions; however, there is no guarantee that the online participants would be anymore captivating and I’m a little worried that I couldn’t get into any games to find out. It is disappointing because this seems like it would be fun, but it lacks player engagement.

As a board game playing with my friends, I see this game as potentially being very enjoyable; however, as a video game, it’s tedious.

Online play seems to be virtually nonexistent at the moment and playing single player offline is monotonous at times. The AI is not intuitive and lacks a difficulty modification. The best aspect of this game is the design and soundtrack; neither of which saves this game from being underwhelming.

The Witcher Adventure Game fails to live up to the standards established by CD Projekt RED and The Witcher series of RPG’s.