Toad and Toadette star in Captain Toad: Treasure Tracker as they get their very own starring roles.

Headlamp? Check. Goggles? Check. Tons of treasure to find and puzzles to solve? You better believe it. Captain Toad: Treasure Tracker is just a few days away from launch on the Nintendo Wii U, and brings the first game set in the Mushroom Kingdom that doesn’t star one of the Mario Bros along with it.

Featuring over 70 levels of action, Captain Toad is a very different type of game for a ‘Mario’ title too. Focused squarely on puzzle solving, the good Captain doesn’t hop on and squish enemies the way Mario and Luigi do, in fact, he can’t even jump. No, instead he’s got to be crafty to make his way through all the game’s levels unscathed and find all the coins, Super Gems, and Power Stars on his way.

Although it’s a spinoff, Captain Toad definitely counts as a new IP for Nintendo too, and one that the company is more than happy to have as it pads its library of titles for this Holiday Season. 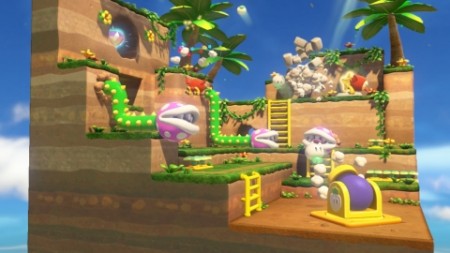 “The already strong lineup of exclusive Wii U games available this holiday season grows even more with Captain Toad: Treasure Tracker,” said Scott Moffitt, Nintendo of America’s executive vice president of Sales & Marketing. “This charming new IP joins the ranks of fun family franchises that can only be experienced on Nintendo systems.”

I had the chance to sit down and play Captain Toad: Treasure Tracker a while back at a Nintendo preview event, and it was pretty sharp. The puzzle gameplay is fresh thanks to the fact that it’s coated in Mushroom Kingdom colors and characters and feels lively and not at all dull, which is something that usually puts me off puzzle games in general.

All in all, it’s a fun time, check it out when Captain Toad: Treasure Tracker hist the shelves for the Wii U this Friday, December 5th.

Jason's been knee deep in videogames since he was but a lad. Cutting his teeth on the pixely glory that was the Atari 2600, he's been hack'n'slashing and shoot'em'uping ever since. Mainly an FPS and action guy, Jason enjoys the occasional well crafted title from every genre.
@jason_tas
Previous Geometry Wars 3: Dimensions (PC) Review
Next Valiant debuts new Prestige Format next week