Axis comes to a close with issue 9 this December 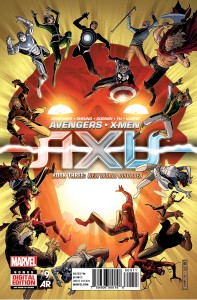 This December, the Earth-shattering finale to the biggest comic event of the year explodes into comic shops as heroes, villains and more collide in AVENGERS & X-MEN: AXIS #9 – the epic conclusion! Blockbuster writer Rick Remender along with artists Jim Cheung, Terry Dodson and Leinil Yu bring heroes and villains to the brink for the finale of Act III: New World Disorder – and not everyone will make it back!

Armies of heroes and villains wage war in the streets of Manhattan as the X-Men and their leader Apocalypse prepare to annihilate all of humanity. With the remaining Avengers twisted and corrupted by the Inversion, our only hope lies with the most despicable villains in the Marvel Universe. Led by the frail and vulnerable Steve Rogers, these villains are all that stands in the way of total obliteration.

To save everything, sacrifices will be made – and the lives of Avengers and X-Men alike will be torn asunder. An X-Man will meet their horrifying fate! An Avenger will make an appalling choice! An old foe must claim the mantle of his greatest enemy. And a new team of Uncanny Avengers will be born!

The Marvel Universe as you know it is about to be rocked to its core. No fan can afford to miss the shocking finale in AVENGERS & X-MEN: AXIS #9 – on sale this December!

Lots happening here. To some degree, we already know an answer or two. Iron Man, for instance, looks to remain inverted from the previews for his and Daredevil’s books going forward. Tony Stark goes back to his old playboy ways, the way he was before he had his heroic ‘awakening’ and became Iron Man, which begs a question: is it me, or is Marvel a tiny bit obsessed with making the armored Avenger into a semi-villain?

I mean, I might be off base here, but he was basically the baddie in Civil War, and now again he’s going to be the heavy in Daredevil, and an almost godlike figure in his new hometown of San Francisco. It’s just kind of weird from I sit, though I’m sure the publisher has a master plan of sorts for him in the works. As to who will die, well, I’m just hoping it’s not Cap. No, not that Cap, Steve Rogers.

Marvel also has made a habit of wrecking Cap’s life from Civil War till now, and I’d hate to see the newly de-powered (are what I mean?) Rogers get the axe in the final issue of Axis. Either way, this is one not to miss out on if you’re a dedicated Marvellite. Axis #9 hits the stands from Remender and the team of Cheung, Dodson, and Yu, this December the 24th.

Jason's been knee deep in videogames since he was but a lad. Cutting his teeth on the pixely glory that was the Atari 2600, he's been hack'n'slashing and shoot'em'uping ever since. Mainly an FPS and action guy, Jason enjoys the occasional well crafted title from every genre.
@jason_tas
Previous World of Warcraft: Warlords of Draenor (PC) Review
Next Dark Souls 2 heading to Xbox One and PS4