Nintendo will once again be powering-up shopping malls across the US this Holiday Season with Amiibo, playable games, and a few famous faces. 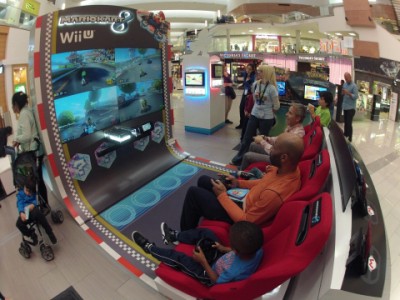 If you’ve been in a shopping mall at any time over the last few Holiday Seasons, then you’ve probably run into a Nintendo station. These not-so-little encampments are usually home to a series of kiosks where the company has their biggest titles of the Holiday Season displayed in playable form for the throngs of shoppers that the season tends to draw out.

This year will be a little different though. There’ll be plenty of games to gee you a break from shopping, so don’t worry about that, but there’ll also be some familiar characters running around that you can take some snapshots with. Costumed characters in the form of Mario, Luigi, and Pikachu will be out in force and ready to add a little more mirth to your mall experience.

Games on display for the Wii U include Super Smash Bros. for Wii U, Mario Kart 8, Hyrule Warriors, Captain Toad: Treasure Tracker, Super Mario 3D World, Skylanders: Trap Team and Nintendo Land. And if you’re mor the mobile type, the 3DS games that will be up and ready to play will be  Super Smash Bros. for Nintendo 3DS, Pokémon Omega Ruby, Pokémon Alpha Sapphire,Mario Kart 7, The Legend of Zelda: A Link Between Worlds, Kirby: Triple Deluxe, Tomodachi Life, Yoshi’s New Island and Sonic Boom: Shattered Crystal.

You can expect to find the Nintendo Holiday Mall Experience in the below listed malls from November 24th, right up to the first day of Winter, December 21st. Happy shopping.

Jason's been knee deep in videogames since he was but a lad. Cutting his teeth on the pixely glory that was the Atari 2600, he's been hack'n'slashing and shoot'em'uping ever since. Mainly an FPS and action guy, Jason enjoys the occasional well crafted title from every genre.
@jason_tas
Previous IDW revives The Mutanimals as TMNT mini-series
Next Advanced Warfare has already become the ‘most streamed’ game of 2014 on Twitch