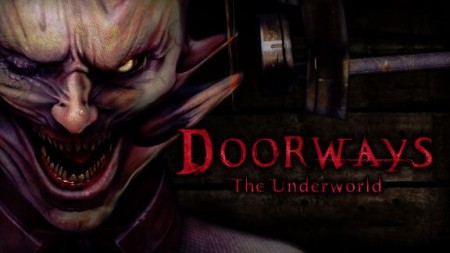 Doorways: The Underworld would probably best be described as a combination of Dear Ester and Amnesia. It takes the walking simulator storytelling from the first, and combines it with the dark and sometimes frightening style of the latter, all the while not really excelling in either one of the two forms.

The main portion of the game takes place in the minds of different patients at a mental hospital and, as their shrink, you must navigate their own made up worlds to try and learn more about them. The premise is quite unique for a game and would be really entertaining except for the fact that most of the stories end up flat and boring. They lack much of the frightening aspect expected from a horror game and opt instead to tell stories about people. This doesn’t make for a necessarily bad game, but when it’s trying this hard to be a Halloween thrill ride, it just doesn’t hold a candle to other horror titles.

Gameplay is pretty weak as well, and most of the time you will be walking through dark corridors trying to find the next room to move the story along. Most of the action is simply going through the environments looking for keys or information to unlock the next section. You will encounter a few monsters but, as in the Amnesia series, it’s best to avoid them at all costs rather than die at their hand. And that basically sums up the gameplay. You’ll also read information found throughout the environment and use it to piece together the story of the patient you’re currently investigating, which is interesting, but it’s also pretty simple and doesn’t take too much skill to make it much fun.

As far as the visuals go, they are sufficient for a game that spends most of the time in the dark. You often can’t see more than a couple feet in front of you, making it more than a bit difficult to gauge just how good the game looks on a grand scale. But from what you can see in front of you, Doorways: The Underworld actually looks pretty good. The graphics are nicely done and textures and lighting seem to work great, and they give the various environments you’ll find yourself in the creepy feeling that developer Saibot Studio was definitely looking for. The audio is also sufficient but not great. Most of it is just punctuated by thumping music and “spooky” howls. It gets a bit annoying after a while but is good enough for the game they are going for.

This game isn’t really for anyone looking for interesting gameplay or mechanics. Doorways: The Underworld is much more a storytelling experience than what we would consider a ‘game’, though this isn’t the first time a title like this has come along and that line has been blurred as of recently. If you really want a few cheap jump scares and a weak but fundamentally entertaining story, then play this game. But if it’s a more entertaining horror themed title that you’re looking for, then it’s probably best to look elsewhere for you October thrills.

A young lad on a magical journey through the dark and terrifying world known to many as "the industry". From his hellish prison, Isaac can hear the cries of pain and suffering from those who came before him, only to hear their hearts stop in utter terror. Video games aren't all fun and games kiddies.
Previous Runers (PC) Review
Next The Walking Dead Season 5 Premiere Episode (TV Review)